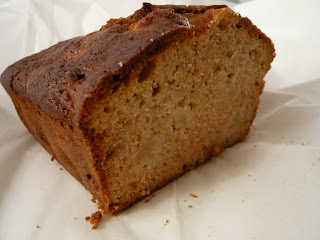 Perhaps I should have called this one 'Lumpy bumpy cake' because that's certainly what it looks like! I didn't realise when I was taking the photographs that this cake would turn out looking so non-descript or I might have made more of an effort to make it look good. Never mind though, taste is what counts!
An invention using what was on hand, autumnal flavours to celebrate the season and with the intention (yet again) of using up ingredients before they expired due to old age.

Method
- Preheat the oven to gas 3-4 (175C)
- Grease and line a 2lb loaf tin, plus another much smaller tin. I only lined the 2lb tin initially, but correctly guessed that there was too much mixture for it, and quickly made up another tiny tin (less than 1lb).
- Cream the butter and sugar until light and fluffy.
- Add the eggs, flour, cinnamon and caramel syrup and beat well until all is combined.
- Cut the apple into small dice (I left the peel on my apple to add texture) and fold this through the mixture.
- Pour/spoon into the prepared tins and place in the oven.
- Bake for 1hr 15-30 minutes. This seems quite a long time, but is what I've written in my notes. I think I'd check earlier, especially for the smaller cake.
- Remove from the oven and allow to cool on a wire rack.

Enjoy with a cup of tea or with custard as a lovely pudding. 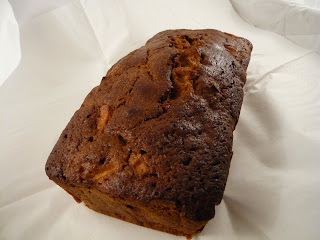 I really enjoyed this cake although not the most attractive cake ever! It was light and moist from the apple with a hint of spice from the cinnamon, but without being overpoweringly cinnamon-y. I was also pleased to find that the apple stayed suspended in the mixture well, rather than sinking; I did cut it quite small. Would make again (which would please my colleagues who also enjoyed this cake!).
Posted by Caroline at 20:00

Well I think it looks mighty fine. Love the combo of flavours!

I am getting a cup of tea right now and this would be the ideal cake to have with.
Have a nice day!
Barbara

Yum! Caramel AND apple - perfect combination! I'd like a slice right now, please.. ;-)

Looks gorgeous! I love loaf cakes like this - so easy to keep cutting off another slice

You'll give your poor cake a complex calling it ugly! It's not ugly at all - just rustic! I love all the flavours you've used - it doesn't get much better than apple and spice

TCC is right - no cake is ever ugly. Rustic is a good word! It sounds a lovely combination of flavours

Katie - thank you. Sometimes loaf cakes are just what you need - easy to keep in the cake tin!

CC - you have a point, it was a lovely cake really, just not the most attractive! Rustic is a good word!

Suelle - thanks! I think I'll adopt rustic from now on!

Choclette - I ought to try cider in my cakes, sounds like a great idea.

I must work out how to suscribe to your blog as I keep missing important posts like these!

I suppose all the cake is gone now (sadly) oh dear, I did want to try some too...

and what do I see on Twitter but Dan Lepard also doing a caramel christmas cake.... I can't bear it... I just ate a twix bar and it's not the same is it. (sadly mopes off to bed)