Chocolate Fruit and (not Nut) Cases (without red noses) 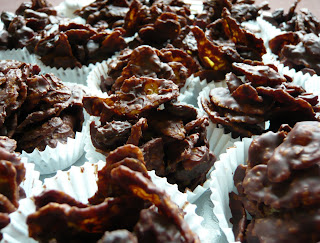 G doesn't like cake. How can that be? How can someone not like cake? But anyway, he doesn't. He claims to like chocolate cake, but I don't ever remember seeing him eat it. (I think he likes his gran's chocolate cake which no-one could possibly replicate so we've given up trying!) But he does like these. In fact, he can't get enough of them, so they're the thing I make for his birthday, in lieu of a proper birthday cake.

I have to admit though, there is something rather enigmatically delicious about these. You wouldn't think it from the simple list of ingredients, but they are extremely more-ish, to the point of being addictive. Best from the fridge so that the chocolate is nice and set, but if you don't mind sticky fingers they're lovely at whatever temperature.
In 2001 Delia Smith published 12 new chocolate recipes in aid of Comic Relief. The booklet cost £1 and was possibly the best £1 ever spent (I think J probably bought it though, so I'm not claiming it's the best pound I've ever spent!) because I've made four of the twelve recipes, and of the remaining eight, three contain nuts so I'm unlikely to ever make them. That's a pretty good hit rate for someone who owns cookbooks they've barely opened let alone made anything from! These come from that little booklet and have been made over and over and over again in my household, always with a positive response. Be warned, they will dissapear in the blink of an eye. Because they were originally for Comic Relief they were Chocolate Fruit and Nut Cases with Red Noses. I subbed out the stipulated toasted hazelnuts for dried cranberries (as suggested by Delia) and have never bothered with the red noses (half a glace cherry) but if you want to, don't let me stop you! These are the perfect size for an after dinner bite.
So where is this fabulous recipe, I hear you cry. And you would be right to be dashing to the kitchen to make them - but not if you're on a diet as they're so addictive you'll be thrown right off track unless you've got a will of steel. The big night of Comic Relief may be over for this year, but Delia's legacy from 2001 lives on still..... 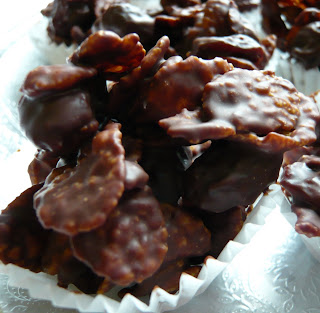 Method (this is simplicity itself!)
- Line 2x12 hole mini-muffin tins with paper cases
- Melt the chocolate, golden syrup and butter over a bowl of hot water (barely simmering, although I just use boiled water from the kettle - by the time it has cooled down the mixture is melted!)
- Stir the melted ingredients together until well combined. Add the raisins and cranberries and mix briefly followed by the cornflakes. Stir gently, being careful not to smash the cornflakes if possible. Keep stirring, there is more than enough chocolate to coat it all, but you'll need to get right down to the bottom of the bowl, because the chocolate collects there and tries to hide! If you want to make more, add more cornflakes a few at a time, mixing until they're coated. Eventually the mixture won't take any more cornflakes as there won't be enough chocolate to coat them. If you're doing them to sell, I add more cornflakes, if they're for family I don't bother.
- Divide between the muffin cases and leave to set.
Enjoy - you really won't regret making these as they're so much better than I could possibly tell you!
PS For some reason, it's the dark chocolate and cornflakes that really make these. I can't imagine them working with milk chocolate or rice krispies. Sorry!
Posted by Caroline at 12:00

these look so nice !!

Very nice indeed - I'm not that mad on the glace cherries. I pick them off and give them to my husband. Your photos are great, especially the last one!

These look delicious, I can imagine that corn flakes would go quite well with chocolate!