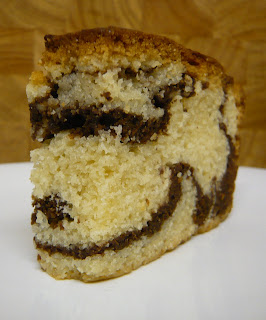 Anyway, I was reminded of the existence of the little freebie booklet 'The Guardian Guide to Baking' (with recipes predominantly by Dan Lepard) which was given away in November 2007 with one of the Saturday issues of the paper. In here is a recipe entitled 'The easiest cake in the world' which is a rich soured cream cake. I actually don't think the title is accurate - yes, the cake is easy to make, but an all-in-one sponge (such as I used for these butterfly cakes) is even easier! 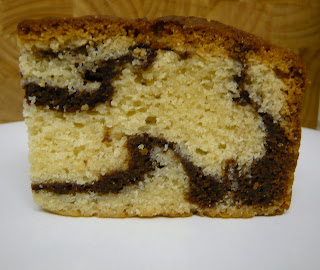 I decided to follow Dan's recipe closely and he gives quite a few option for baking. I went with a 7" (18cm) square cake tin but also decided to adapt the recipe slightly by adding a cocoa sugar spice layer. Well, that was the idea. You can see from the pictures that the layer wasn't quite there, it turned rather magically into a swirl!

Soured cream butter cake
Ingredients
200g unsalted butter, softened
250g caster sugar
2 large eggs
200g soured cream
300g plain flour
3 tsp baking powder
For the cocoa layer
10g cocoa powder
30g light brown soft sugar
1 scant tsp mixed spice
a splash of milk
Method
- Preheat the oven to 180C/Gas 4.
- Grease and line a 7" square baking tin.
- Cream the butter and sugar until light and fluffy and then add the eggs, one at a time until well combined (an electric mixer is best here).
- Beat in the soured cream until it disappears and then sift in the flour and baking powder, beating to combine.
- Remove a large dollop (sorry I didn't measure this, but probably about 1/5 - 1/4 of the mixture - I only wanted a thin layer) and add it to the cocoa, sugar and spice in a small bowl. Add the milk and mix through until well combined.
- Spoon around 1/3-1/2 of the white mixture into the cake tin, smoothing out into all the corners. Place small blobs of cocoa mix and spread to cover the white layer completely. Then blob the remaining mixture onto the top (it is easier to spread it evenly if you do many smaller blobs than piling it all in the middle).
- Place in oven and bake for 45 minutes to an hour (mine took around 1 hour 15 minutes I think) until a skewer inserted comes out clean.
- Remove to a wire rack and allow to cool. 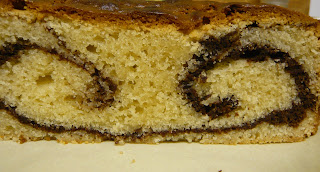 As you can see from the picture above, my carefully planned layer did not materialise. I honestly don't know why not, I very carefully made a layer of dark in the middle. The only thing I can think of is that the edges of the cake started to heat up and cook more quickly than the middle, leading to a sort of convection current effect where the edges rose up and fell into the cooler middle. Anyhow, it isn't important - it's quite a pretty effect at the end of the day!

So to taste... the spice was subtle - if you want something more obvious you'd have to increase the amount. I couldn't really taste the cocoa, but that was ok because I only really wanted it for the colour anyway.
I have to admit I wasn't madly keen on this cake. (My personal preference is this buttermilk cake!). The cake is very rich and buttery - you can really feel the smooth butteriness of the soured cream. However, this was very much a personal opinion, as my colleagues quickly snaffled it with much praise and delight!
Posted by Caroline at 12:25

This cake looks so delish and I adore the swirls!

I've never made a cake with soured cream before. I make lots of muffins with them though so should give this a try

what a gorgeous cake!