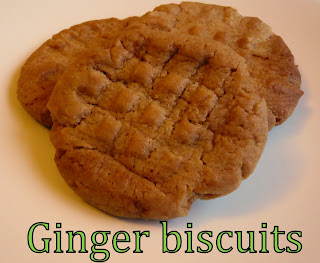 Simple, tasty biscuits to last through the week. I love ginger as a flavour in cakes and biscuits (and chocolate too!), and one my favourite cakes of last year were these gingerbread spice cupcakes. I wanted to try and make my own ginger biscuits, and turned to a tried and trusted recipe from an old copy of Sainsbury's Magazine. The recipe is one from Katie Stewart and was the beginning of a series on 'bakes, desserts and sweet treats'. I don't recall any of the other recipes from the series, but this one stuck with me. They're really easy to make, but can't be called superquick because there is a necessary waiting stage while the dough firms up sufficiently to be workable. It's not really a problem though, as the raw dough keeps for up to a week in the fridge or can be frozen so you can make the dough the day before and then refrigerate it until you've got time to bake the biscuits.

I wanted a really spicy, hot, gingery flavour so I increased the amount of ginger given in the recipe from 2 level tsp to 3 level tsp, but they weren't really hot enough. Next time I'd try 5 tsp ginger I think. A work still in progress.
Ginger biscuits
Ingredients
3 level tsp ground ginger (or to taste)
225g/8oz plain flour
1 level tsp bicarbonate of soda
110g/4oz butter
110g/4oz caster sugar, plus 2 tbsp for rolling
110g/4oz golden syrup

Method
- Sift flour, ginger and bicarb into a bowl (if this is going to go in the fridge later to firm up, choose an appropriate size - it doesn't need to be massive).
- Melt the butter, sugar and syrup over a low heat until melted and warm but not hot. (This smells absolutely divine!)
- Add the wet mixture to the dry ingredients and stir well to combine. The mixture will be very soft and unworkable at this stage.
- Cover and leave in a cool place (I used an unheated room) or the fridge for an hour or so to firm up. (At this stage the dough will keep for up to a week)
- Preheat the oven to 180C/350F/Gas4. Turn the dough onto a clean surface and divide into 30 equal pieces - it's important that they're all the same size so that they cook in the same time. (I acutally weighed mine to get a better idea of whether they were even, each piece weighed about 19g - I know that sounds time consuming, but it wasn't really!)
- Roll each piece into a ball and toss the balls in the extra 2 tbsp caster sugar (I forgot this step, but it's really worth doing as it adds a lovely crunch to the final biscuits - the easiest way to do it is to put the sugar into a plastic food bag, add a few biscuit-balls at a time and shake)
- Arrange on two baking trays, spacing them apart because they do spread. Squash slightly as shown in the picture below.
- Bake for 10-12 minutes. Let them cool on the trays for a minute because they will be very soft. Once they have hardened up a bit move them onto a wire rack to cool. Store in an airtight container. 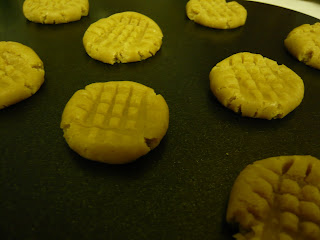 You can see the squashed biscuits ready for baking above. They do spread quite a bit, so remember to leave space between them. 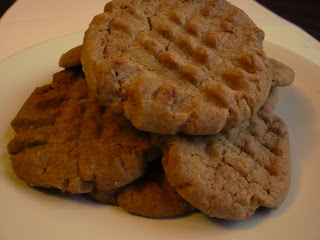 Delicious with a cup of tea or coffee at morning breaktime. I usually take my cakes into work to share, but these are mine, all mine! (Looks greedily at buttery, gingery biscuits with a lovely crunchy edge yet still slightly chewy middle - can't get that from a bought biscuit!). As I said earlier, the recipe still needs tweaking to my taste - these weren't quite gingery enough, so I'll try some more ground ginger next time (for there will be a next time!) and perhaps if that doesn't do the trick I might add some ginger juice. For some reason I prefer them without ginger chunks. Once I get the recipe right I might coat them in dark, dark chocolate. Drool.......
Posted by Caroline at 17:10