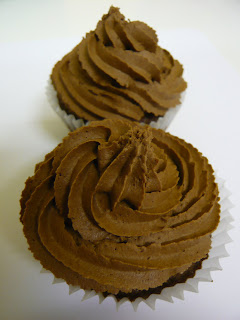 Mmmm, chocolate buttercream. Just imagine your teeth sinking through the smooth richness of the buttercream before coming into contact with the soft, moist and yielding cake. Well, why aren't you in the kitchen already then? Oh, right, you need the recipe first!

I have a small confession to make. This recipe was a rescue effort (a successful one I hasten to add) due to a lack of care and attention on my part. I had halved the recipe from a printed one I was following, but inadvertently forgot to halve the melted butter component, realising as I poured the butter into the mixture and looked at a pool of melted butter forming that something had gone wrong. So, making the best of a bad job, I added a little more flour to soak up the excess butter and the rescue was complete. No-one other than me (and, well, you now!) was any the wiser as they still tasted great. In for a penny, in for a pound as they say, and having added extra butter to the cake mix I decided to go for full-on buttercream topping for these beauties.
Chocolate cupcakes with chocolate buttercream icing
Ingredients
2 large eggs
85g caster sugar
75g self raising flour
18g cocoa powder
90g butter, melted
1/2 tbsp hot water
For the buttercream icing
75g butter
150g icing sugar, sifted
50g dark chocolate, melted
Method
- Preheat oven to 180C/Gas 4. Put 9 muffin cases into a muffin tin. Alternatively grease a 9 hole friand pan.
- Beat eggs in a bowl with an electric mixer for about 5 minutes until thick and creamy. Beat in the sugar a tbsp at a time until dissolved.
- Fold in the sifted flour and cocoa, the butter and the hot water.
- Divide between the cases. They won't be very full but it doesn't matter.
- Bake for 12-15 minutes until the cakes spring back when touched lightly. Remove from tin/pan to a wire rack to cool.
For the buttercream icing, cream the butter and icing sugar together with an electric whisk until very light and fluffy. Add the melted chocolate and continue to beat until the mixture is very pale. Transfer to a piping bag with the nozzle of your choice on it, and pipe to your heart's content.
I used 85% cocoa chocolate to try and make the icing a little less sickly sweet. I'm sure 70% would also work well though. 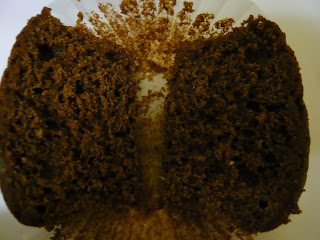 These have a lighter, more open texture than the recipe without the extra butter and flour, presumably due to the presence of extra raising agent in the flour. Naked cupcakes before receiving their complement of rich buttercream. They have risen a little more than the original recipe ones, but not so much as to make icing them difficult.

Needless to say, these disappeared in a trice at work - diet be gone!!
Posted by Caroline at 22:25