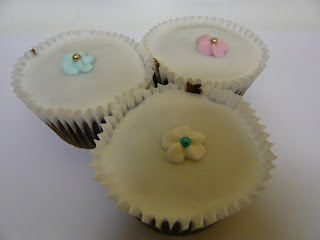 Sometimes only chocolate will do. This was one of those times. I find that the tried and tested combinations are best - chocolate works really well with mint, ginger, dried cherries and cranberries, raspberries etc (obviously not all at the same time!). I'm not a fan of weird and wacky combinations - I was going to give an example, but to be honest, when you love chocolate that much, it goes with most things!
However, chocolate and mint are a match made in heaven as far as I'm concerned. I decided that a fairly light chocolate cake topped with an intensely minty sweet icing would be good.
These are a little different from standard cupcake sponge cakes, as they start out by whisking the eggs until they are creamy and voluminous. I used a recipe from The Australian Women's Weekly 'Cupcakes and Cookies' book. So without further ado, here is the recipe:
Chocolate cupcakes with mint icing
Ingredients
2 large eggs
85g caster sugar
50g self raising flour
18g cocoa powder
45g butter, melted
1/2 tbsp hot water
For the icing
Icing sugar
Mint essence
Hot water
Method
- Preheat oven to 180C/Gas 4. Put 9 muffin cases into a muffin tin. Alternatively grease a 9 hole friand pan.
- Beat eggs in a bowl with an electric mixer for about 5 minutes until thick and creamy. Beat in the sugar a tbsp at a time until dissolved.
- Fold in the sifted flour and cocoa, the butter and the hot water.
- Divide between the cases. They won't be very full but it doesn't matter.
- Bake for 12-15 minutes until the cakes spring back when touched lightly. Remove from tin/pan to a wire rack to cool.
When cool make the icing. I didn't bother measuring the icing sugar for this, it's just a case of mixing as much as you think it needs. I wanted quite a thick layer of icing. For part of the liquid component use the mint extract. I used this one, which is deliciously intense. Start by adding a small amount and then keep tasting. I used a tsp. 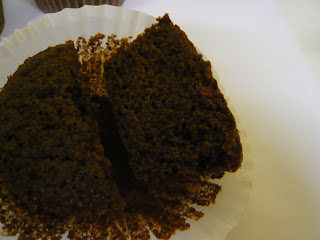 You can see that the cake is deliciously dark and chocolatey inside, with quite a close texture. 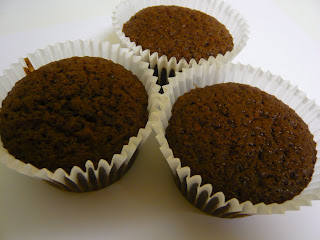 Naked cupcakes waiting for their icing coat. They have risen quite a bit, but haven't got a domed top, which is ideal for adding a layer of icing.
These went really well, with good reviews.
Posted by Caroline at 18:50