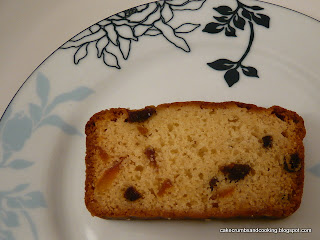 I really need to start planning more seriously before buying. And then follow through on those plans. Before Christmas I had a vague, half formed idea in my head that it would be really good to make dried apricots in brandy as a gift for my lovely mother. Sadly, time ran away with me and they never did get made. I did accomplish the first step of the plan to make them though... I bought the dried apricots. Really quite a lot of apricots as it happens, because the Kilner jar I was planning on using can take quite a lot of fruit and I thought having a few spare wouldn't be a problem.


I think you're probably getting the idea of where this post is going. Yes, I now need to use up rather a lot of dried apricots. The loaf made a small dent in the bag, but the journey of a thousand miles and all that... 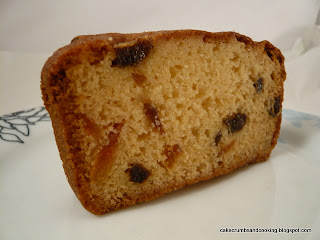 It's a surprisingly good combination. Marmalade and apricot, apricot and marmalade. The apricots (and don't be put off their appearance - I favour the unsulphured dried apricots which are naturally darker than their sulphur dioxide preserved sunny cousins) are intensely sweet and the marmalade adds that bitter edge to counter the sweetness. I was pretty impressed given that I was just glancing around to see what on earth I could do with all these apricots! (Other ideas welcome....)


Hmm, apparently this was such an off-the-cuff loaf that I didn't bother to make a note of either the ingredients or the method. This is annoying and slightly distressing because I want to share this loaf cake, and I want to be able to make it again. Ah well, my (very vague) memories of making it will just have to suffice.

60g dried apricots, chopped small (I used unsulphured and they were rather dry - I was worried they'd shrivel up and be nasty and chewy but they weren't)
125-150g self raising flour (I genuinely can't recall this)
there may or may not have been a spoonful of yogurt in there...

Method - more secure than the ingredients list, as I can remember what I did!

- Preheat the oven to gas 4/180C. Grease and line a 2lb loaf tin. Cream together the butter and sugar until light and fluffy. Add the eggs, marmalade and flour and continue beating until well combined. Fold through the apricots and spoon into the prepared tin. Bake for around 40-50 minutes. I recall thinking that 35 minutes would be enough for this rather shallow loaf cake, but mine took about 50. Remove from the tin and leave to cool on a wire rack. 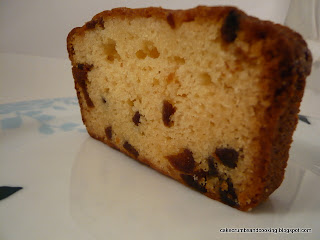 As I said earlier, this is a successful combination - bitter shreds of peel, sweet chunks of apricot and a rich buttery cake to offset it all. Rather happily consumed by my work colleagues. And rather appropriately, I started this blog 400 posts ago with a marmalade cake for my very first post :-) I have indeed reached 400 posts and although those who find the time to blog every day will no doubt scoff at my measly total, I'm rather proud of myself!
Posted by Caroline at 22:50

Congratulations on your 400th post! No mean feat indeed - I think you should be very proud! I'm not a fan of apricots but I do like marmalade in cakes. I have a recipe for an apricot cookie on my blog that was popular with the masses if you are interested.

Lovely idea to use up the apricots. I bet the orange and apricot go so well together.

You could try stewing up a few chopped apricots to make a sort of jammy mixture and then using this instead of the jam in a bakewell tart. Almond and apricot are a macth made in heaven!

Lovely recipe, Caroline! I know exactly how you feel - I always end up with waaay too many ingredients bought with the best of intentions that just don't work out. Ah well, it leads to wonderful creativity - like your lovely cake! :)

I think 400 posts is a massive achievement - congratulations! And I love this cake, I'm just looking forward to you next 400 posts!

Congratulations on your 400th post - it is not to be scoffed at. I still have some way to go to reach that number. Marmalade and apricots combined in this loaf sound like a lovely combination. I'm with you on unsulphered, apart from being better for you, they taste so much nicer.

Why don't you make your apricots in brandy now for next Christmas. I would have thought the longer they are soaking in brandy the better?

Also, I bought a massive 5 kilo bag once - it lasted about 8 years and the apricots were absolutely fine, so I shouldn't worry about needing to use them in a hurry.

congratulations on 400 posts - that is quite a decent amount of baking to have shared - and much enjoyment and inspiration for readers such as me.

Lovely cake - apricots and orange seem to go together well so it sounds great. As for your dried apricots, my mum makes an apricot jam with dried apricots that is lovely and I have made an apricot and coconut slice (on my blog) that I highly recommend. And if you really can't use them just send them my way and sylvia will eat every one - probably before breakfast - she loves them

Ros - thank you! Apricot cookies sound good, I'll have to have a look!

Katie - I like the idea of a jammy mixture in tart cases - yum!

Celia - I guess creativity is one way to put it. I'm loving all the twists on pound cake that you're doing at the moment - I guess it comes from the same desire to experiment!

Freerangegirl - thanks for commenting. I hope I'm still here in another 400 posts time!

Choclette - thanks. I do prefer unsulphured apricots, but always worry that people reading won't recognise them, as the bright ones are so much more common/popular. Good to know that they'll probably last well - thanks for letting me know!

Johanna - thank you. Apricot jam with dried apricots definitely sounds good. I wish I could send you these to share with Sylvia and watch her enjoy them :-)