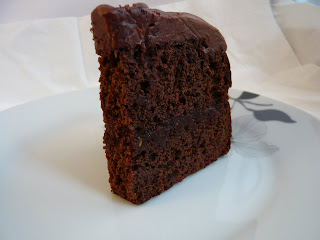 This cake was one of Dan Lepard's recent Saturday columns in the Guardian, and when I saw the picture, I was determined to try it as soon as possible (which I did, I'm just behind with posting!). I couldn't resist the combination of jam and chocolate and liked the idea of beating more jam into the icing too - sounded like a good way to give a flavour boost to the icing. 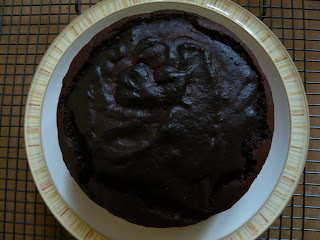 I didn't want a full 8" cake, so decided to halve the recipe and bake it in a deep 6" tin, having done the calculations to tell me that if anything, this would make the cake very slightly shallower. I therefore decided that the cooking time would be about the same. Unfortunately as you can see from the above photo this wasn't really the case. Yes, it's not a great photo, but the top was quite dark, as were the sides towards the top. However, this didn't matter too much as the cake had conveniently cracked around the outside so I decided to lop off the burnt top and discard it before proceeding with the icing. This also had the advantage of providing a more even top for the icing. My fault for halving Dan's recipe, and for not checking sooner. 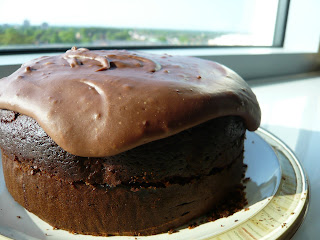 There we go, all better with lush icing cascading down the sides. I had thought that the inclusion of yogurt and golden syrup in the cake would make for a moist cake, but this didn't seem to be the case. I don't think this was entirely my fault for overcooking the cake slightly, because Suelle over at Mainly Baking also made the cake and she found it on the dry side. However, I didn't share her lack of icing problem. This could be because although I started with the right amount of jam and chocolate I just added icing sugar and water until I felt I had a sufficient quantity of icing to cover the cake thickly and hide the 'overdone' parts and any remaining cracks! I guess this also explains why I couldn't really taste the jam in the icing, although I did use a good quality raspberry jam. 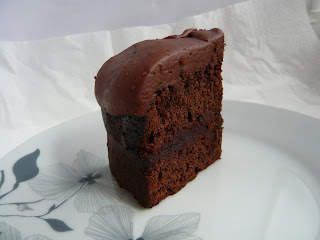 This isn't a cake I'll make again because although I enjoyed eating it (as did my colleagues!) it was on the dry side and the raspberry jam just didn't come through as well as I had hoped. On the plus side, it lasts well in a cake tin and is a great robust cake for carrying about - there is no fear of it crumbling into nothingness in your bag, so a good one for a lunch on the move.

I do love seeing Dan's recipes in the Guardian - shame it was a bit dry, looks rather lovely all the same.

shame that it was dry, the idea sounds amazing like you said!! i'm inspired to try a jam-involved cake now though!!
Becca :-)

What a pity you weren't totally happy with the end result - looks fab, especially with all that wonderful icing!