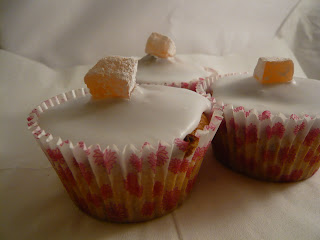 When I was little, we had a phrase in our household - the 'eyes and tummies problem'. Yep, it was how my mum referred to my brother and I being slightly greedy and taking more from the serving dish than we could manage and subsequently complaining of being full and not able to finish our dinner. These cupcakes are the result of an adult variation of this problem. I shall explain... at Christmas time I look at all the delicious boxes of chocolates and sweet treats and I buy them. I do not logically consider how long it will take one person to finish up the excess purchases. Although many of the boxes I buy end up as presents, I often find that I've overbought to the extent of not having anyone left to give them too, and there is always the element of wanting to enjoy them myself. Yes, I am hanging my head in shame at my greed...

Why am I confessing this? Well, these rather good cupcakes are the result of part of the remaining box of turkish delight. I also at some point bought a squeezy bottle of condensed milk, no doubt thinking that it would be really useful to be able to use a smaller amount than comes in a tin. I'm sure it would be if I had multiple uses for condensed milk. I don't! Although feel free to suggest some more. So I ended up making two batches of these cupcakes. The first batch were vanilla and the second turkish delight. 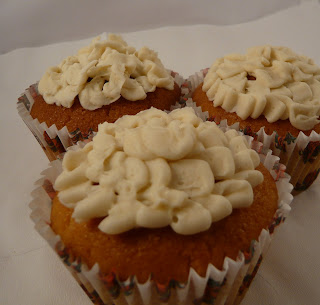 You can see the vanilla cupcakes above. The vanilla buttercream is piped in a slightly odd way because I was using a new tip that I had hoped would let me do something else, but turned out to be completely wrong. By that stage I had a bag of buttercream and needed to get it out - i.e. through the nozzle!

There are a couple of differences between the vanilla and turkish delight cupcakes. The vanilla ones were the first I made and I stuck to a recipe I found here pretty closely. The second batch I didn't have enough condensed milk left, so decided to improvise by substituting milk and caster sugar. It worked well, unsurprisingly since condensed milk is effectively milk and sugar as far as I understand!


(For the turkish delight cupcakes I only had 160g condensed milk left, so added that plus 50g caster sugar and 50ml milk. I also added 1tsp rosewater and 125g chopped turkish delight and left out the vanilla extract)


Method
- Preheat the oven to gas 4/180C. Line a muffin tin with paper cases (I recently found some pretty ones with flowers on them - small things please me!). The vanilla cakes made 9, the turkish delight 10.
- Place all ingredients (except chopped turkish delight if making this flavour) into a large bowl. Beat with an electric hand mixer for 3-4 minutes until well combined. Now fold through the turkish delight if you're using it, or I guess an equal weight of any other flavour you fancy - chocolate chips, dried fruit and so on.
- Spoon into the waiting paper cases and bake for 20-25 minutes until golden brown. If you like your cakes paler, bake for less time (oh, the joy of common sense!)
- When baked, remove to a wire rack to cool.

For the vanilla cupcakes I made a simple vanilla buttercream by beating 50g softened butter and probably about 125g icing sugar together with 1tsp vanilla extract until very light, creamy and fluffy. Decorate the cupcakes as you want, which is probably not by copying what I did..... 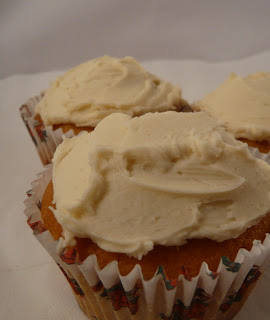 I was really pleased with the way these turned out - soft and sweet and the mixture had enough strengh to hold the pieces of turkish delight in suspension so they didn't all end up on the bottom of the cupcakes (although a fair few did). Vanilla is always popular and turkish delight went down well too. I have to admit that the flavour of the rosewater didn't really seem to come through. I was quite cautious adding it to both the cupcake mixture and the icing, next time I'll add more.

These look good! Have you got any suggestions for leftover After Eight mints? ;-)

I am totally at one with what you say about overbuying those Christmas goodies. This year, I went one worse and ordered from the sale catalogue after Christmas of overstocked Christmas goodies and ended up with some exotic Italian things which we have been eating our way through ever since...oh the shame of it.. love those cupcakes, you are very clever!

I have to admit I've never liked Turkish Delight but the Vanilla Cupcakes do look and sound lush!

I love Turkish Delight - your cupcakes look fabulous. Call the piping "scalloped", and you'll feel much better about it. :)

The recipe sounds very versatile, I'm sure you could add all sorts of inclusions to it!

Suelle - sadly I haven't, but if you find a good recipe will you let me know ;-) Turkish delight isn't all I've got left!

Joanna - exotic Italian things sound good. I've got Easter eggs I bought in the post-Easter period too, well they were cheaper than buying the equivalent chocolate in bar form!

Maria - thanks. Turkish delight is something that I like occasionally, in small amounts!

Celia - scalloped makes it all sound deliberate, I'm liking that!

How clever! I would never have thought to put condensed milk in a cupcake!

You are a woman after my own heart ;0)

Great use for condnesed milk - I have half a squeezy tube left over from some Lemon Bars I made recently.

Don't feel bad - I still have some Christmas chocolates in the cupboard (and let's be clear - that's not down to my wonderful self restraint!!!)