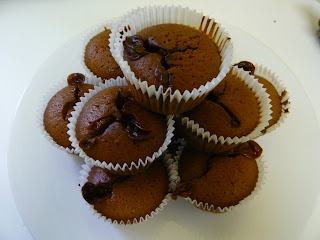 Well, if the name isn't enough I don't know what'll tempt you to make these rather delicious little cakes. I recently treated myself to one of the Australian's Women's Weekly little cookbooks - Cupcakes and Cookies. I quite like this series, the books are small and light, perfect for carrying around and well priced, at £3.50 each, which is only about 20p more than the current food magazine prices in the UK. Plus you then have a neat little book to keep, rather than thinking about whether or not to throw away/recycle the magazine (I usually, well always I suppose, keep my magazines, and yes, I am running out of space to store them....) and whether those recipes you ripped out will ever get made or not. Anyway, I digress. This particular book has been well perused during coffee breaks at work and there is a large mental list of 'bookmarked recipes' in it. So I thought I'd make a start on them.
I had in mind the caramel mud cakes (pg 17, if you're interested!) but when it came to the time for cooking, I discovered I had no white chocolate. (Unheard of for me not to have every type of chocolate under the sun in the house, but it somehow came to pass - fear not though, I've now rectified this oversight and have a couple of bars of the white stuff stashed in case the urge to make the original recipe overcomes me.)
So, improvising like the best of them, I noticed a bar of fairtrade milk chocolate asking for a home: 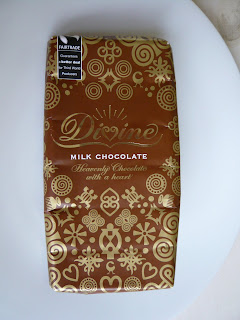 Divine chocolate is a fabulous brand, and I am of the opinion that we should all do as much as possible to promote fairtrade brands. The divine website is great, I really recommend you visit it for all the background on their brand and also an explanation of the meaning of the West African Adinkra symbols used on the packaging. The 70% is rather good too..... So with the chocolate issue solved I decided that having modified the recipe slightly, I'd modify it again to be exactly what I wanted. The other recipe in the book that was crying out to be made was the coffee caramel cakes. So, dropping the coffee idea, but retaining the caramel (in the form of chunks added to the batter just before cooking) I set to work. (I was obviously intended to make the caramel cakes, as I'd even bought the right kind of toffees for them in the weekly shop!).
On to the recipe:
Chocolate caramel mud cakes
Ingredients
125g butter, chopped
100g milk chocolate, roughly broken
150g light muscovado sugar
90g golden syrup
160ml milk (I used semi-skimmed)
150g plain flour
50g self-raising flour
1 egg
12 Werther’s original chewy toffees, chopped into 3 each (not the hard candy ones) - NB these tend to annoyingly stick together again.

Method
- Preheat the oven to 160ºC/140ºC fan assisted, line a 12 hole muffin tin with paper cases.
- Combine butter, chocolate, sugar, syrup and milk in a small saucepan; stir over a low heat until smooth. (Make sure the heat is low, and keep stirring – I think I had my heat too high and I ended up with a few lumps that I had to blitz with a stick blender). Transfer mixture to medium bowl; cool 15 minutes.
- Whisk sifted flours then egg into chocolate mixture. Divide among cases. (NB, mixture is extremely runny – I ended up pouring it into a measuring jug in order to be able to pour it into the cases).
- Place 3 pieces of toffee into each case – I just put them on the top, with the resulting caramel explosion – if you want, push them in a bit, I was worried they’d sink, but I don’t think they would.
- Bake for about 30 minutes until cocktail stick inserted comes out clean (NB don’t insert it through a bit of toffee!!!)
- Dust with icing sugar if you want, or make a buttercream and pipe it on, or enjoy as they are!!!!! 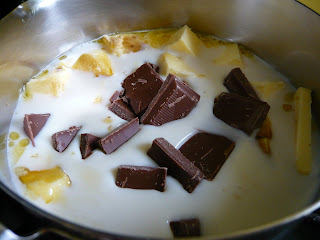 Mmmmm, all the yummy ingredients melting together. 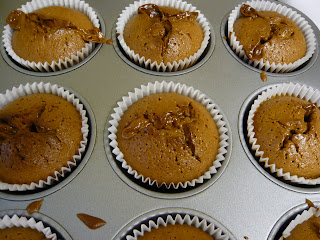 Just out of the oven, the cupcakes tend to dip a little as they cool - as you can see from the top picture. I love the way the caramel pieces make the cupcakes look as if they are miniature volcanoes exploding!

These were an absolute hit at work - I actually had to type out the recipe for two people, which may not sound like very many, but I usually have to fish for compliments! (I know I should probably have more confidence and try not to care what other people think, but it's nice to know the cakes are good occasionally!) so it was nice that they went down well.

They are quite sweet and sticky, so depending on how much of a sweet tooth you have, you may want to pipe a little buttercream onto them, or just dust them with icing sugar (as you can see from the photos I didn't have time for either decoration, which was a shame, but they were well received without!).