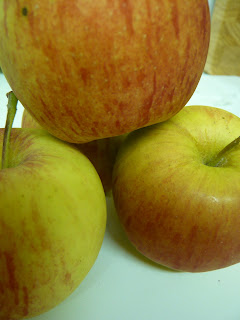 There was definitely an autumnal nip in the air the morning I decided to bake these (the weather has subsequently improved and we've had the nicest weekend for about two months or so but there's no accounting for the weather here at the moment) and so I wanted something slightly warming and using the apples just coming into season. I suppose cake baking isn't a particularly seasonal hobby - sugar, butter, flour and eggs don't really have seasons, but using other ingredients certainly adds a seasonal slant. The new season's apples are really coming in now, and the ones pictured above are Delbard Estivale. I may have said before that I do my shopping at the supermarket, as do many (although in an ideal world I'd avoid supermarkets) and the range of apples they have does tend to increase slightly in the autumn. Not as much as you'd think, given the massive range of apples that can be successfully grown in the UK, and there is still a preponderance of foreign apples, even in the middle of our season (similar to importing raspberries from the USA in middle of summer - why - it's sheer madness!) but at least they're trying.
I decided to deviate from my usual muffin recipe and try one from a little book I've had a while - Muffins - Fast and Fantastic by Susan Reimer. A Canadian who moved to the UK, she discovered that although recipes could be changed from cups to metric/imperial measurements, they didn't always work out properly. Having discovered why, and overcome the hurdles of baking in a different country (ounces, cup sizes, differences in flour being the main ones) she published this book, which contains lots of delicious recipes and variations (and handy hints for gluten free muffins).

The apple spice muffin recipe fulfilled my baking desires and here it is.


Method
- Preheat oven to 200C/Gas 6. Place paper cases in a muffin tin (makes 10-12)
- In a large bowl, sift together the dry ingredients: flour, baking powder, spice and sugar.
- In a second bowl, beat egg with a fork. Stir in chopped apple and milk, followed by oil.
- Pour all of wet mixture into dry. Stir until just combined, adding the raisins in the last few strokes of mixing. Mixture should still look lumpy.
- Spoon into tins. Sprinkle with the demerara sugar if you want a crunchy topping. Bake about 20-25 minutes until tops are lightly browned and spring back when pressed gently. Cool for several minutes to make removal easier.
- Remove to wire rack and allow to cool completely. 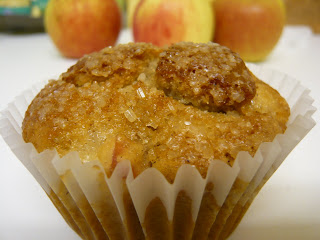 These are really delicious muffins. Lots of different textures due to the juicy apple, chewy raisins, the lovely crunchy sugar topping and the light cake. Went down extremely well at work.
Posted by Caroline at 21:51