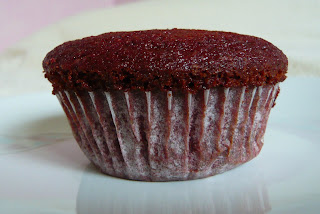 One of the best things about the internet is being able to look at the cooking pages in all of the national newspapers without having to buy them - cheapskate, moi? - never!!! Anyway, when I saw a recipe for red velvet cupcakes in the Telegraph a couple of weeks ago the recipe really appealled to my sense of adventure, well, actually more to my sense of disbelief - a whole tablespoon of red food colouring - really??? I tend to be more of a natural/organic/wholesome type of girl really. So I had to try the recipe.

Well, the mixture really was red, as the photo below shows: 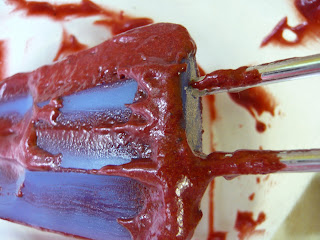 The cakes were quite easy to make, but the recipe specifies cupcake cases, which I took to mean smaller 'bun' or 'cake' cases. I think I should have used muffin cases. As it was, it didn't matter too much because the only tray I have is a muffin tray, so the mixture didn't overflow out of the cases and collapse, it overflowed and was supported by the muffin tin. Hence the sort of souffle floating effect.
I didn't do a cream cheese frosting, just a vanilla buttercream - note to self, do not start making buttercream with an electric whisk, use a fork first to start incorporating the icing sugar, unless you particularly enjoy breathing icing sugar!!! I attempted to pipe the mixture, but I think my piping nozzle was too small and the buttercream a little stiff so I gave up in favour of just smoothing the icing on.
The final effect was ok, but not quite the stunner I was hoping for. 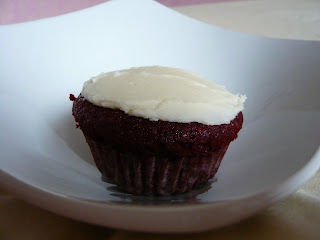 Taste verdict: novelty value of red cake went down well, although no-one had ever heard of red velvet cake at work. Colleagues couldn't really taste the cocoa in the mixture, but they were generally well received. I didn't get a picture of the insides as they were all eaten, which speaks for itself really.
Posted by Caroline at 21:36