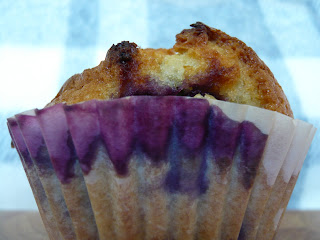 Isn't that colour amazing! I had some blueberries languishing in the fridge, asking to be rescued and made into something delicious. I'd seen this recipe for blueberry muffins on Rosie's blog, Rosie bakes a 'peace' of cake, and fancied doing something similar. I didn't want loads of muffins, so a recipe making six appealed.
I tweaked the recipe slightly to suit what I had available, so here it is:
Blueberry Muffins
Ingredients
150g Plain flour
1 1/2 tsp baking powder
85g sugar
85ml sunflower oil
1 large egg
1/4 tsp vanilla extract
100ml milk (I used semi-skimmed)
90g blueberries
Method
Preheat the oven to 200C, 400F or Gas mark 6. Line a muffin tin with 6 paper cases. Sift the flour and baking powder into a bowl (I don't normally bother with sifting, but it's apparently important for muffins to help get air into the mixture as they only get a quick stir later on) and add the sugar.
Measure the sunflower oil, milk and vanilla extract in a measuring jug, break the egg in and whisk just to break up the egg and combine the liquid ingredients. The oil will break into droplets and if left, the mixture will separate again with the oil on top, but it doesn't matter. Pour into the dry ingredients and mix to combine. Try and do this with as few strokes as possible to avoid overworking the batter (this makes for heavy muffins) and when it looks almost all combined, ie there are no dry floury bits, add the blueberries and mix through briefly. Don't worry about lumps, the batter should look lumpy.
Spoon into the prepared muffin cases, mine were almost full to the brim and place in the oven.
Cook for 25-30 minutes, but check after 25 in case your oven is a bit hotter than mine. I checked at 25 and decided they needed 5 minutes more. 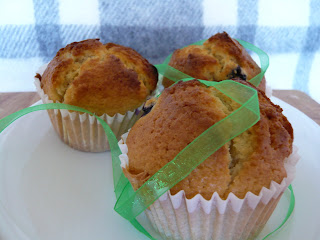 There's no action shot, because I couldn't bring myself to take a photo of my lunch at work, but let me assure you they were really delicious. The texture of the cakey part was perfect - light and moist. I have to admit that had I had more blueberries I would have put them in, so Rosie is right to specify more! I'm never sure about blueberries though, and the ones I bought certainly didn't have an amazing flavour. I think next time (and there probably will be a next time!) I'll try raspberries (which I adore) and perhaps lemon zest instead of the vanilla. Oh the possibilities. I might also try self raising flour and knock the baking powder down or out as I found they left a slight fuzz behind the teeth that I sometimes find with baking powder. Not sure why though!

I'll leave you with a final picture of a perfectly peaked and risen muffin, the best I've made yet! 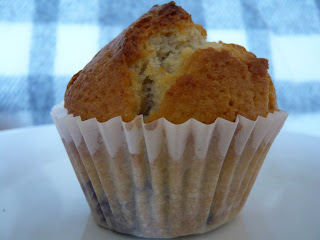