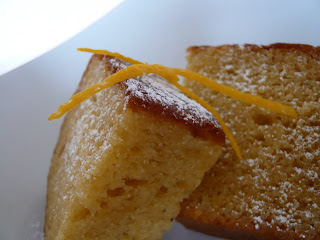 As often happens I had eggs to use up and having seen this recipe for marmalade cake, fancied giving it a try. Marmalade was already in the store cupboard so a very spur of the moment recipe. I only had two eggs, but they were huge ones, so I decided to weigh them and adapt the recipe to suit, after all it's a basic victoria sponge mix! (Not something you'll often find me saying - I tend to stick to recipes verbatim!)
I took it into work, where it was promptly devoured, so although I didn't get a piece, I'm assuming it was good!

Preheat oven to 175C/Gas 3-4 (this was a little slapdash!). Grease and base line (with baking parchment) a 2lb loaf tin. Weigh the marmalade into a pan and heat very gently, squishing any lumps, to help it blend evenly with the rest of the ingredients later. Weigh sugar and butter into a bowl, beat until pale and fluffy. Add eggs, one at a time, beating them in well. Add flour and fold in, followed by marmalade. Mix well to ensure even marmalade distribution and spoon into prepared tin.
Place in oven and bake for around 50-55 minutes until golden brown and springy when gently touched. (Or check with a cocktail stick for stickiness if you're not sure - it should come out clean.)
When cooked, remove from oven, leave to cool for 10 minutes or so, then turn out carefully onto a wire cooling rack, removing the baking parchment as you do so.
I didn't bother with the orange rind but I suppose it would have enhanced the flavour further. I also didn't bother with icing, partly because it looked nice and moist anyway and because icing makes cutting it for work difficult and messy (and I was in a hurry because I should have been revising!).
Posted by Caroline at 18:55