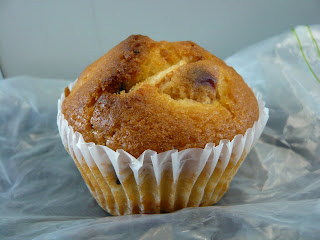 Having found a recipe for muffins I really like and having tweaked it to taste, I'm definitely in the muffin mood now. So quick, so easy, so tasty, what's not to like!!!
The original recipe came via Rosie, at Rosie bakes a 'peace' of cake, which is such a delicious looking blog! So thank you again Rosie. I've posted before about making blueberry muffins, which was my first attempt. The major tweak I made was to replace the plain flour with self raising and add a scant 1/2 tsp baking powder. For some reason this seems to get rid of the nasty 'fuzz behind the teeth feeling' that I sometimes find with baking powder. I also upped the vanilla extract to 1 tsp. Since then I've made fresh apricot and dark chocolate (about 100g of fresh apricots, each chopped into 8 pieces - that's about 4 smallish apricots, and 40g Lindt 70% chocolate) shown in the picture at the top of the page. Yielded seven. The picture below shows the inside of the muffin. The cake part is deliciously light and the soft apricot and slightly bitter dark chocolate are a perfect compliment to the cake. A great travelling snack, hence why the pictures aren't that great and the paper slightly crumpled on the top picture - I was on a train journey and they were very well travelled muffins! 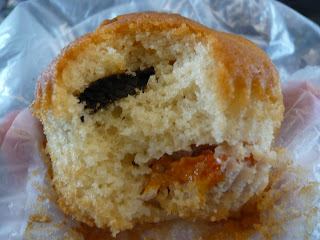 Next up were white chocolate and dried cranberry (50g dried cranberries and 50g Green and Blacks white chocolate). Yielded six. Sorry, no pictures of these as they all went to work and were snaffled before I could get a shot of them. Then most recently, white chocolate, dark chocolate (same chocolate as before) and dried cranberry. I doubled the recipe for these (so used 100g dried cranberries, 60g dark chocolate and 50g white chocolate - using up bars left over from the previous two batches!) and got 12 muffins but for whatever reason, they didn't rise quite so much. Still tasted excellent though!
It really is an easy recipe, to the extent that I weighed out and sifted together the dry ingredients for the double choc and cranberry batch one evening, weighed and chopped the chocolate and weighed the cranberries and then covered it all until the following morning. I then measured the wet ingredients, mixed them and baked them before I went into work the next morning! (I think I only had to get up about 10-15 minutes earlier than normal, although as someone who takes forever to get ready to leave the house in the morning I guess most people still wouldn't have time!!!) One of the advantages of using sunflower oil is that you don't have to mess about melting butter or waiting for it to soften as for cake recipes, and I can kid myself that because it isn't a saturated fat they're better for me...... (I think the technical term for this is 'suspension of disbelief'!!!! don't burst my little bubble and remind me how much sugar and refined flour etc is in them!). The method of stirring together is quicker and easier than creaming with a handheld blender too - and less noisy so less anti-social early in the morning!
J had one of the strawberry and white chocolate muffins I posted about here on the flight out for our holiday so I got a picture of the inside of the muffin (and the extortionately expensive 'coffee' in the background) I perhaps should have put a little more white chocolate in them, as she didn't seem to have very many pieces of choccie! 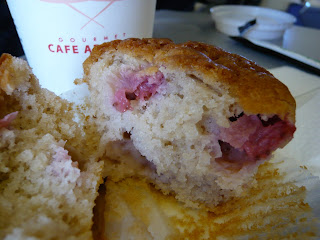 All in all I'm sold on this recipe, and they seem to go down well at work too!
Posted by Caroline at 22:15