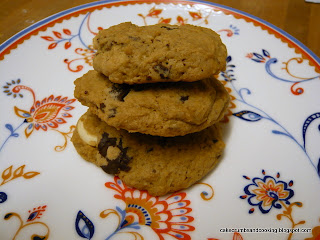 I was recently contacted and asked if I would like to take part in the Aero Perfect Pairing challenge. With the offer of Niki Segnet's book 'The Flavour Thesaurus - Pairings, recipes and ideas for the creative cook' I was definitely in. The book arrived along with a big bag of Aero's Chocolate Orange bubbles (which I didn't manage to get a picture of) and a bar of Aero mint chocolate. 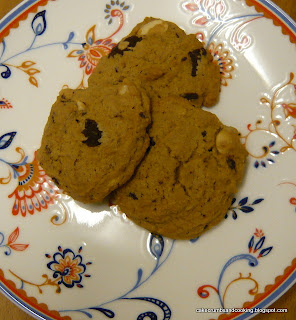 I have to confess that I wasn't quite sure which flavour combination to go for - I wanted something I thought would work, but which isn't too widespread and well known. The brief stated that the recipe didn't have to include either Aero or chocolate but being a bit of a chocoholic, I decided that I would include dark chocolate in my recipe.


A cookie recipe that I'd bookmarked ages and ages ago from the Hungry Hinny sprang to mind as being an interesting one in which to incorporate different flavours. The recipe is for cream cheese cookies and doesn't use egg at all. I increased the amount of flour slightly and hope that the Hungry Hinny doesn't mind me reproducing my attempt at these cookies. Very unusually for me, I made these by hand - only a bowl and spoon required - no need to make washing up and use the stand mixer! 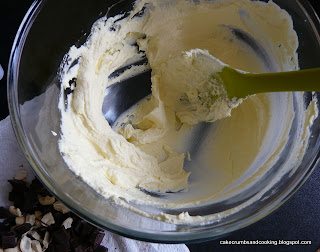 
Method
- Preheat the oven to 160C. Line two baking trays with parchment paper.
- Beat the cream cheese until softened, then add the melted butter and vanilla. Keep beating - it will turn from curdled looking lumpy mess into a beautifully smooth batter (I had serious doubts when I saw the initial mixture but it all turned out fine).
- Beat in the sugar and then the flour, bicarbonate and salt until a dough forms.
- Fold in the cashews and dark chocolate.
- At this point I ignored the instructions to leave for 30 minutes to chill and just dolloped small blobs onto the lined baking tray, spread well apart. (For my mixture putting it in the fridge didn't really seem to make much difference - I put the rest of it in the fridge while the first batch of cookies were baking, but actually preferred that first batch slightly - the second batch appeared 'grainy' - no idea why)
- Bake for 15 minutes until very light brown. Allow to sit for around 10 minutes once removed from the oven to make it possible to transfer them to a wire rack (they'll be very soft once they come out of the oven).
I made 22 cookies from the mixture. 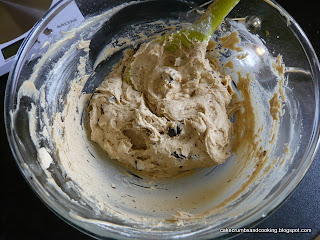 Verdict? Actually, personally I wasn't all that keen on this cashew chocolate combo - I couldn't really taste the cashews and think I should have toasted them before adding them which would have enhanced their flavour and made them crunchier - cashews are quite a soft nut really. Otherwise successful and colleagues liked them more than me. The actual cookie dough part was very soft and far more cakey than I was expecting. I'd like to try the recipe again though. I'm wondering about using some golden syrup sugar from Tate and Lyle I bought recently and using dried fruit like cranberries along with the chocolate. An interesting recipe to play with.

And my colleagues finished up all of the Aero chocolate orange balls quite happily! 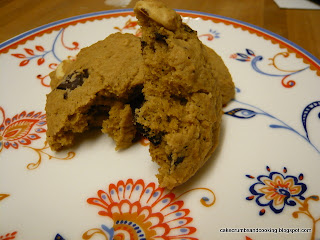 Disclaimer: I received a copy of 'The Flavour Thesaurus' and some Aero products. All views expressed are my own. Thank you Sophie.
Posted by Caroline at 16:15

Nice to hear from you. I tried cookies with cashew butter and choc chips years ago and they were a disaster but I liked the idea of the flavours together - this looks better than my attempt. I quite like the softness of cashews so that would appeal to me. And I love one bowl recipes where you don't have to get out messy beaters or anything.

I've used cashews in biscuits - they're so nice I wonder why we don't bake with them more often. Your bics look lovely

Like the idea of cashew and choc chip cookies, but more than anything I love that plate.