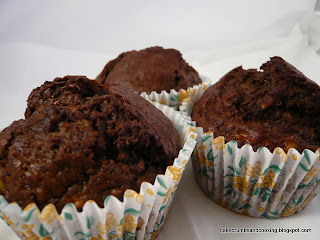 Seduced by a bag of bananas for a reduced price (seven bananas 59p, how could I resist?!) I found myself unable to eat them all before they became too ripe for my liking. And thus another round of the fun game known as 'Caroline hunts for new ways of using bananas creatively because she's got too many.....' was instigated. Luckily I didn't have too look too long or too hard this time.


I recalled seeing Nigella's Chocolate Banana muffins on a blog I often visit - Kitchen Diaries Challenge 2012. I do own a copy of Nigella's 'Kitchen' but have to confess that these were a recipe that I sort of looked at with an eye to making and then thought that they looked rather dowdy in the book's photography and mentally dismissed them. However, seeing Maggie's photograph of her beautifully risen muffins restored some faith that they wouldn't look flat topped and sad. After all, if you aren't using the posh muffin cases Nigella uses you need the actual cake to do the talking as it were. 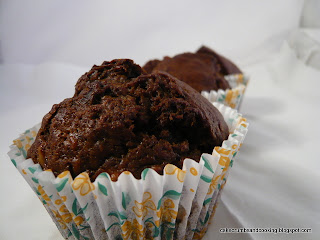 The recipe can be found here, on Nigella's website and is also in 'Kitchen'. You can see what I mean about the photograph, although perhaps I'm being mean and it's hugely enticing to everyone else out there. Taking heed of Maggie's advice I too added some little extras to my muffins in the form of 60g of 70% dark chocolate, broken fairly small, but not into tiny pieces and 1/2 tsp of cinnamon. 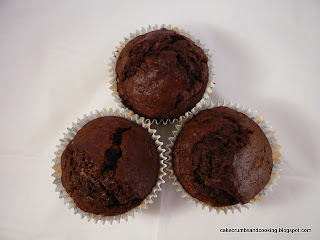 The recipe was very quick and easy to pull together - and despite my misgivings over the only raising agent in the recipe appearing to be 1 tsp bicarbonate of soda these were very successful - producing nice peaks and they were actually done in the 15-20 minutes specified (I had thought at least 25 minutes would be needed, but not so). I was glad of the additions of cinnamon and especially the added chocolate because I found the actual crumb of the muffin to be slightly lacking in flavour. This is also a criticism I have read on other blogs (although I forget which ones) levelled at these muffins. It was slightly odd, they smelled more bananar-y than they tasted! The cinnamon wasn't really discernible at all using only 1/2 tsp and I think I'd add 1tsp next time. In all though, the texture was lovely and light and moist (and not at all oily, which I sometimes worry muffins made with oil will be) and the added chocolate definitely lifted them and gave them a chocolate boost of flavour.

I'm entering these into Forever Nigella (co-ordinated by Sarah of Maison Cupcake), where the guest host Fleur has chosen the theme of 'Afternoon Tea' for June's challenge. I think these would be perfect for afternoon tea - especially of the sort that requires baking at very short notice - very quick and easy to make and bake - perfect for when visitors arrive unannounced or when you've got a rainy afternoon to fill and want to have a picnic on the carpet!
Posted by Caroline at 20:05

Photographing chocolate cakes can be a bit like photographing black cats! Although they're gorgeous in real life the view through the lens never quite matches up. I'm sure they taste fantastic! Thanks for taking part in Forever Nigella x

I understand what Sarah means by photographing dark things!! But you're right, the photo in the book is not as 'muffiny' as you'd expect. Yours look much better! Always good to have more banana recipes. I too seem to always revert to my classic banana cake because I know it works and tastes do good but banana muffins is a great idea!

No worries Sarah, I know just what you mean. My photography isn't the best anyway, and chocolate is notoriously difficult - no offence taken!

Dom - yes, different banana recipes are always good! Glad you know what I mean about the photo in the book.

I'm always looking for something else to bake with bananas. I don't think I've paired them with chocolate so might give these a go.

I think tht chocolate and banana is a winning combo and my girls would just love these. I agree with the comments about photographing chocolate cake. It's much harder than it looks! Thank you so much for entering Forever Nigella this month.

Chocolate and Banana are just meant for each other. I'm gonna have to try this one.

These look lovely - I far prefer your photos with your pretty, bright muffin cases!