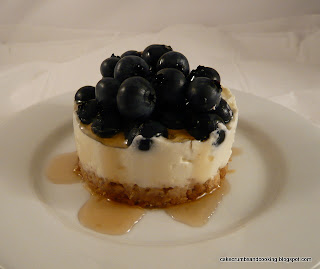 And now for something a little different from the usual baking you see on my blog. I was contacted a while ago and asked if I would like to look at the recipes that have recently been added to the Total Greek Yogurt website so I agreed to take a look, Total yogurt is definitely one of my favourites. I am a big fan of plain yogurt over flavoured, finding most flavoured yogurt too sweet or with an odd thickened texture (Longley Farm is my exception - utterly delicious, properly tangy yogurt, but sadly not too widely available).


My first port of call in the 1000 recently published recipes was naturally the baking ones. I had a good long browse through before deciding that sadly there wasn't anything that took my fancy at all. I had hoped for a delicious cake using yogurt as an ingredient (like this Stone Fruit Yogurt Cake by Dan Lepard that I have made numerous times) but instead there were quite a lot of recipes with a yogurt frosting (all very well, but should really be kept in the fridge I think, so no good for sharing with colleagues). 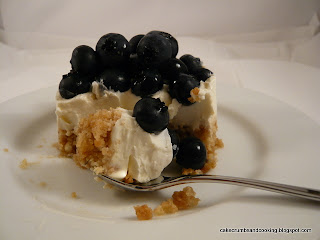 So I ended up choosing this blueberry yogurt cheesecake. After having agreed to receive ingredients to make the cheesecake I learned that this is part of Total's campaign to spread the word about their delicious natural yogurt. Other points the lovely people at Total would like you to know include:


- They are running a competition to celebrate the launch of their 1000 ways to use Total Yogurt. This recipe is one of 30 you can find across various blogs. The more you find, the more chance you have of winning the grand prize.
- These are also available in a brand new Facebook app, so you don’t even have to leave Facebook to get inspiration for dinner. (I'm a facebook newbie - find Cake, Crumbs and Cooking here - so I don't really know if this is a good thing, but I guess it is)
- Total yoghurt is the only authentic Greek yoghurt on sale in the UK. Because it is made in Greece in the traditional way it is much thicker and more robust than Greek‐styled yoghurt. As such it is much better to use in cooking and is still just as good for you. Total Greek Yoghurt is 100% natural.
- Speaking of the prize, top chef Paul Merrett has put together his list of essential kitchen equipment. The lucky winner will get this amazing wish list including the very best cookware worth more than  £800.

Here is the competition:

There are 30 TOTAL recipes on 30 different food blogs across the web. Can you find them? If so, you are in with the chance of winning Paul Merrett's Ultimate Chef's Kit, worth over £800. On the tab you'll find clues leading to 10 of the hidden recipe and over the next few weeks, additional clues will be posted on the timeline to help you find the final 20. The more recipes you find, the more times you name goes into the draw and the more chances you have to win. The recipes are part of the brand new recipe collection 1000 Ways to Love your TOTAL. 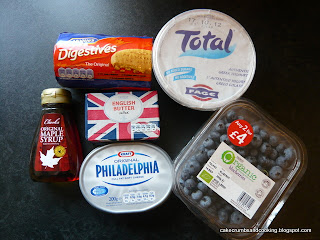 This recipe is quick and easy to pull together, which is just what is needed when you're short of time. I halved the recipe, not needing extra cheesecake hanging around.


When I received my ingredients I realised I'd need to amend the recipe slightly - the recipe specifies two 'cookie type biscuits' and I had been given digestives and butter. What to do, except make a digestive base?! There was also no clue given as to the size of mould/pastry ring/pastry cutter needed so I had to guess. I used a 7cm diameter ring. I guessed slightly wrongly and ended up with too much cheesecake mixture for my ring. I also guessed the amount of biscuit mix I'd need wrongly too. I decided two digestives (weighing 30g) bashed up and mixed with 15g melted butter would be plenty, and it was; plenty and too much. I used about half of it, which corresponds to one biscuit and about 8g butter.

I was saddened that the 'maple syrup' provided was only 35% maple syrup, so I decided that in order to make the best of the other ingredients I had been given I would use some of my own 100% maple syrup - it seemed silly not to. Well, I do not profess to be a cheesecake afficionado, but I really, really liked this and will definitely, definitely be making it again. The beautiful creamy richness of the yogurt-cheese mixture, the popping of the blueberries as you ate them (can you tell I was generous with my blueberries - pile them high) and the buttery sweet base and smoky sweet maple syrup. Wow, it was lovely. I was worried that the yogurt-cheese mix would be too tart but it wasn't at all.


I would recommend making and eating them the same day though because my method of making the base meant that the yogurt-cheese mixture made it go slightly soggy by the next day which was a bit of a shame. The other thing I would recommend is drizzling with maple syrup just before you eat them because again, this made the base a little soft too. However, the taste was just fabulous. My final point is that I needed a chef's blowtorch to get the cheesecake out of the ring. I was honestly dubious as to whether this would work, but just trying to pull the ring off the cheesecase wasn't working so I used the blowtorch (first time use!) and it worked really, really well (just as well as when fancy-pants chefs use it in television programmes). I really don't know how I would have managed to release it otherwise. I was really pleased with how this looked - very smart and definitely suitable for a dinner party. 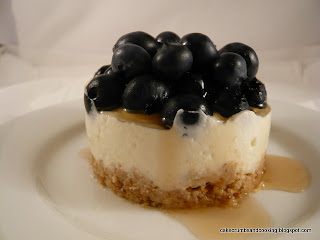 So what do I think of the recipes overall? Well, there are a lot of them. I didn't have a thorough look through all of them (not surprising given there are 1000) but I was disappointed to see that the majority of the baking recipes were 'serve with greek yogurt' rather than actually using it as an ingredient. This is why I picked this recipe - the yogurt is actually used as an ingredient rather than just a garnish or serving suggestion. From the savoury recipes I looked at this appears to be the case too - garnishes rather than ingredients for many recipes.


This particular recipe lacked certain necessary details (such as the size of the ring to be used) and that it would be difficult to subsequently remove the ring without a blowtorch (though if you can think of an alternative method please leave a comment!). I made a different base simply due to the ingredients I was given, but the specified cookie would probably work well. But as mentioned before it was delicious and I'll make it again. I was thinking that a 'deconstructed' version would be easier too - just mix the cream cheese and yogurt in a bowl and add the fruit, buttery biscuit crumbs and then pour over a generous slosh of maple syrup - not as pretty but just as tasty!

Overall, the recipes lack a little detail in how to actually make some of them, which has made me appreciate the work recipe writers put in to their jobs. I think there are some excellent ideas there for inspiration but perhaps not for complex recipes. My love for Total yogurt remains undimmed - it's still utterly delicious.


Disclaimer: I received the groceries pictured above to make this recipe and have included relevant links to Total's website for their campaign. I have not otherwise received any payment and all opinions expressed are my own.
Posted by Caroline at 20:30

Yogurt is one of the main ingredient that makes the recipe really tasty and mouth watering.

Gosh that does look good. Greek yogurt is such a versatile ingredient in baking / sweets.

I love total yoghurt too - good review of the recipes :-)

Even though it was tricky to remove, it looks great. I am totally with you on using pure maple syrup, although nothing comes close to the fresh syrup Lisa from Lisa's Kitchen sent me from her dad's trees. Wow, it was amazing!

It has to be pure syrup! I am very jealous of anyone who has access to fresh stuff though. Total is good yoghurt and these cheesecakes look really good.

The cheesecake looks very professional. I would order this if it was on a restaurant menu.

Glad you managed to make the cheesecake succesfully in the end, looks lovely piled up with the fresh berries!

I accidentally picked up some of that 'fake' maple syrup once, the resulting cookies were fine but much prefer the real stuff!

Daniel - yes, the yogurt is definitely important in this one...

Chele - indeed it is, I love greek yogurt!

Sally - thank you. I always try and give my honest opinions of recipes.

Jac - wow, fresh maple syrup - that must have been utterly amazing!

Foodycat - thanks. Yes, I think I too am jealous of access to fresh maple syrup!

Maggie - thank you. I was really pleased with the way it had turned out.

Anne - thank you, I thought generosity with the blueberries was the way to go!