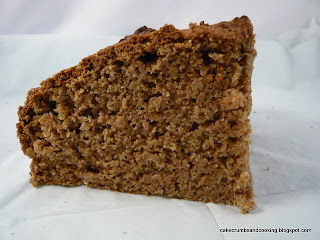 The trouble with starting to revisit lists of things you meant to make, and things you meant to do, is that there was obviously a reason for the item to go onto the list in the first place. When I was making the brown sugar chocolate cake, I was browsing through the many pages in Dan Lepard's forum, specifically the board where the Guardian recipes are posted. The brown sugar chocolate cake was a few pages in, and it took me a while to find it, taking me past lots of the other recipes that I really did mean to make, but just haven't got round to. This is one of them. 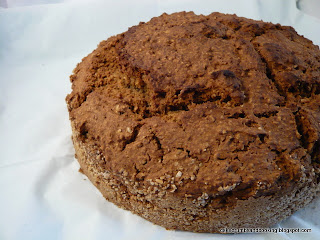 I recently found myself with a freezer full of cake and fruit, but no bread (how does that happen?!) and with lunchtime rapidly approaching (and being rather too lazy to leave the house for the shops) I thought it would be a good plan to test this recipe out now! I have to confess to not entirely following Dan's recipe. I looked at all the different flours I had lining up in the cupboard and decided to do a bit of a mix and match. I kept in the rye flour and the amount of oatmeal, but mine was medium rather than fine. For the 350g wholemeal flour I used a mixture of 100g strong white flour, 100g barley flour and 150g wholemeal spelt flour. I kept the proportions of everything else the same.
I decided to follow Joanna's idea (on the forum discussion) of making the bread in a tin, and used an 8" deep, loose based tin, well greased with butter and then covered with more oatmeal - the intention being to have a slightly crunchy crust to the bread when it was baked, and hopefully to stop it sticking. 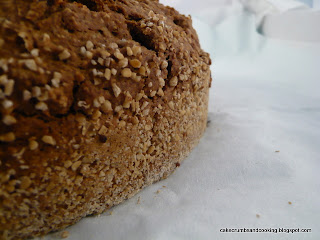 The method is simplicity itself. For Dan's original version see here, but because it's so simple I'll reproduce my version of it here.
- Preheat the oven to gas 6 1/2 / 210C. Grease an 8"/20cm deep round tin, either springform or loose based (mine was loose based) with butter and then generously dust with either flour, or in my case, more medium oatmeal.
- Place all dry ingredients in a roomy bowl and mix well.
- Rub in the butter until no lumps remain.
- Combine the yogurt and water in a jug and then pour the mixture into the dry mixture.
- Mix well with a spoon, and then dollop into the prepared tin. The mixture is very sticky, and I didn't attempt to knead it at all. This isn't a traditional bread dough.
- Place in oven and bake for 35 minutes (I left mine 50, but it was probably done after 45, and my oven was cooler than Dan specified).
- Remove as soon as possible and allow to cool on a wire rack. 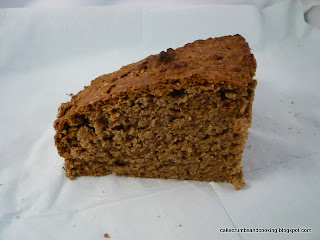 This is absolutely divine fresh and still slightly warm, which is how I enjoyed it, with a roast tomato and goat's cheese salad. I would thoroughly recommend this recipe, I've previously made Delia Smith's recipe and although I like it, this trumps it without question. (I've tried to find a link to Delia's recipe, but it doesn't seem to be on her site, it's not the soured cream soda bread recipe there. The original is from her How to Cook Book 1, published about 10-15 years ago). This maslin soda bread is surprisingly light - the crust is chewy and crunchy from the oatmeal on the edges but the centre is delightlyfully soft and moist, without being too crumbly or dry at all. I know that a quick style non-yeasted bread like this will never have the complexity or sourness of other loaves, but it does have quite a distinct and interesting flavour, due to all the different flours, and a slight sweetness almost, possibly from the interaction of the yogurt with the flours. Writing that seems wrong, I would expect yogurt to add tang, but to me, soda bread always tastes slightly sweet.
Oh, just writing about it is making me want to go and grab another piece to butter and enjoy! I'm very glad that I made this long bookmarked recipe, it will definitely replace Delia's recipe as my go-to for soda bread from now on! 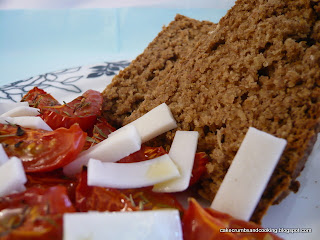 Edited to add: I'm also going to submit this to 'Bookmarked Recipes'. This event was originally founded by Ruth of Ruth's Kitchen Experiments, and has recently been revived by Jac at Tinned Tomatoes, as a vegetarian event.
Posted by Caroline at 21:50

It's great that you have found a new favourite recipe for bread. It looks delicious and hearty.

I love trying new soda bread recipes - thanks for this one.

I always find that soda bread baked in a tin takes longer, so you probably did need the 50 minutes.

How lovely - I've never had soda bread always thinking it would be heavy, now I know otherwise!

Haven't made soda bread in a while - will have to try this one next time. My favourite so far is Lorraine Pascale's - she uses treacle in hers. I've ordered Dan's latest book, so hoping the recipe might be in it - if it ever gets published!

Brownievillegirl - I hope you like it if you try it, I'm sure you'll be able to compare it much better than I can, coming from the land of soda bread!

CC - I was surprised how light it was too!

Choclette - I've linked to the recipe in the post - just below my list of ingredients. Dan has published it in the Guardian. I must get his new book pre-ordered though so thanks for the reminder!

Looks decadent and moist... I love it!!

Malli - thank you for commenting - it was a lovely moist bread!

It is so fitting that I started my new Bookmarked Recipes with a recipe I bookmarked from you and the last entry is from you. It rounds everything off nicely. I am just writing up the roundup and opening July's challenge now.