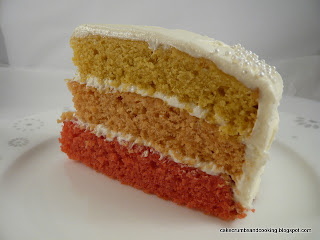 I've seen quite a few brightly coloured cakes around recently, on the Pink Whisk and then BBC Good Food published their recipe for a Rainbow Cake too. Dan Lepard has been in on the act with his Rainbow Cupcakes too. I decided that I didn't want to go the whole hog and do a six or seven layered cake and decided instead to stick to three layers. I decided to go for red, orange and yellow - a sunrise. I know this isn't the best set of photos ever but I really had to mess around with the white balance to even get this far!


I wanted a reliable cake recipe and I've made Nigella's buttermilk birthday cake recipe quite a few times (the original recipe has three eggs and I can see from the scribbles in my book that I've scaled it to two and four egg versions) and it's a good recipe for adapting to different tin sizes. 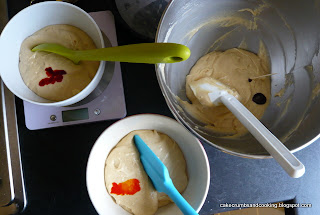 I made the recipe just as stated (there's a copy from the Guardian as a PDF here, which I assume is reproduced with permission so I will link to it) and then divided the mixture into three (I handily remembered to weigh my mixing bowl before adding the ingredients so it was easy to divide the mixture exactly). I added the food colouring and mixed well before dividing between tins and baking for around 20-25 minutes (although I can't remember exactly how long). Although I have far too many 8"(20cm) round tins, I have two sets of two which are the same within the set but annoyingly don't match each other. So I baked two whilst one set of batter waited and then baked the final cake.


The cakes were quite thin, but this was perfect because three full thickness cakes wouldn't have given a very good cake: buttercream ratio. 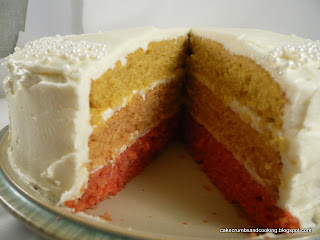 After letting them cool I made a white chocolate buttercream, sandwiched the cakes together with some of it and then spread the rest over the top and sides of the cake so as to hide the interior colour. A scattering of pearlescent hundreds and thousands (very pretty, stocked by Waitrose) finished the cake in style. 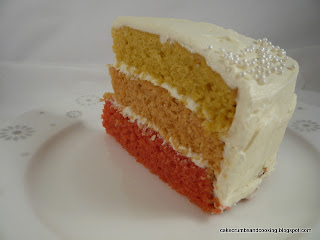 All round very successful - it was very well received at work and this is a great cake mixture to work with. I was pleased with how it turned out but next time will be braver with the food colouring because my colours were a little on the subtle side.

I'm entering this into the Forever Nigella challenge, founded by Maison Cupcake. The theme this month is 'Colourful' and is being hosted by Elizabeth of A Girl in her Kitchen. I think this fulfils the brief!
Posted by Caroline at 18:10

It's beautiful! What a stunning cake!

What a lovely cake...I love the sunrise effect and this would certainly brighten anyone's day! :-)

Wow it really does look like a sunrise! Love the bright colours and decorations.

That cake looks AMAZING. Do you have your own bakery?

It's not a food blog, but it would be cool if you checked me out :)
http://publishedproblems.blogspot.com/

What a pretty cake. Love the sunset effect and much more pleasing to the eye than blue cakes (just my opinion).
Your frosting is so smooth too

such a beautiful cake - I love the subtlety of the colours - it reminds me a little of those neapolitan cakes we had in my childhood (you too?) but so much more classy

What a beautiful cake, I love the colour shading and the finishing touch with the pearls on top - fabulous.

Very pretty. Thanks for taking part!

Beautiful cake! I think your colours look great. Love the pearlescent hundreds and thousands too, so pretty.