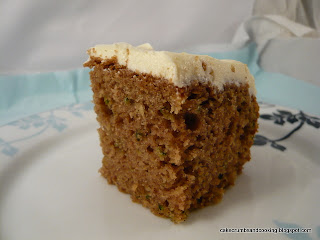 This is an adaptation of a courgette loaf (mine isn't a loaf!) recipe I found in Sue Lawrence's book 'On Baking'. Courgette season is almost here, so when it really starts and all the home gardeners who are overrun with courgettes threatening to turn into marrows overnight start to despair of what to do with them all, I hope this recipe will help a little. Unfortunately I wasn't organised enough to plant any courgettes (or any seeds at all) this year, so my courgettes are from the shops.
The recipe looked really good as it was but I decided to swap in some more unrefined ingredients for flavour and fibre?!; light muscovado for some of the caster sugar, and wholemeal flour for some of the white. 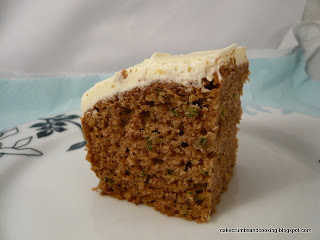 Courgette cake with Lemon buttercream
Ingredients
110g caster sugar
110g light muscovado/light brown soft sugar
3 eggs
150g olive oil (yes, I did weigh it - the mixing bowl was already on the scales and it was quicker and made less washing up than measuring a volume in a measuring jug)
1 tsp vanilla extract
200g courgette, unpeeled
170g plain wholemeal flour (I'm determined to use this dratted bag of flour up!)
170g plain flour
1tsp baking powder
1tsp bicarbonate of soda
1/2tsp salt (I don't usually add salt because I tend to use salted butter, but here there is no other source of salt so I added the salt as specified in the recipe)
scant tsp ground cinnamon
85g walnuts, chopped (optional - obviously I didn't put these in!)
Lemon Buttercream
90g butter, softened
180g icing sugar
zest of 1 lemon
Method
- Grease and line a 10 x 8" shallow tin. Preheat the oven to gas 4/180C.
- Whisk together the sugars, eggs, oil and vanilla until thick.
- Stir in the grated courgette (I grated mine coarsely)
- Stir in all the dry ingredients, including walnuts if using.
- Bake for 40-45 minutes.
- Allow the cake to cool a little before turning out onto a wire rack to cool completely.
- For the buttercream, cream the butter until very soft, then add half of the icing sugar, cream (slowly at first to avoid a lungful of icing sugar) until light and fluffy then add the remaining icing sugar and cream again until very light. I added a couple of tbsps hot water (from the kettle) as the mixture was a little too stiff. Stir in the grated lemon zest.
- Spread the buttercream over the cooled cake. This will make a fairly generous layer. I had a little buttercream left over and had to try really, really hard not to just eat it off the spoon. I'm not sure what I'll do with it yet though... perhaps eating it off the spoon would have been better! 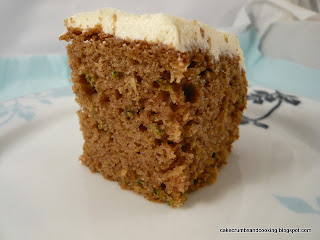 Definitely a successful cake. I have made courgette cake once before and not blogged it because it wasn't hugely successful, but that was using a different recipe. This cake was light and moist, but not oily at all. Some of my happy testers noted that it was odd to see strands of green in the cake, but I quite liked this, and the courgette wasn't noticeable as a flavour, it just added moisture. The olive oil wasn't intrusive either. I only added a scant tsp cinnamon to this cake, and on balance it could have done with more, but I was concerned that I would overwhelm the cake with cinnamon. I think next time I'll make it with a generous tsp of mixed spice and 1/2 tsp each of nutmeg and cinnamon to give more of a spice hit.
The lemon buttercream wasn't in the original recipe, but I think it complemented the cake well, adding a little fresh hit to the spicy cake. The contrast would have been better had the cake been a little more spiced, but it worked well anyway! Colleagues all pleased - quite a few of them had a little sliver of this cake and one of the chocolate orange cake, and happy noises were heard all round!
Posted by Caroline at 19:00

This looks delicious as well as healthy!

I wonder if CT would notice the courgettes? He doesn't like carrot cake, and I always think of courgette cakes as being very similar.

I've always been dubious about trying courgette cake but this looks really lovely.

Looks lovely. I've never made Courgette cake but often heard about it. Your recipe looks great and I totally get the whole vegetables in baking so I will defo give this a go the moment my courgettes are ready. X

Suelle - the CT would probably see the green, but I bet if you peeled them he'd never know!

MissCakeBaker - give it a go, it's only like carrots in a cake i.e. yum!

Dom - let me know how you get on with it.

I'd definitely add more spice next time though.

I don't think I've had courgette cake (as sweet one anyway) before. But anything that gets happy noises when eaten has got to be a good thing. (And again the muscavado sugar- it just makes things taste good!)

Wow this sounds seriously good - what an interesting combo of flavours. p.s if you head over to my blog you can win a free gourmet cheesecake on my giveaway!

Love the sound of the lemon buttercream with the cake. And now I'm almost tempted to swap my scales for some digital ones - anything to reduce the washing up. Liking the idea of using olive oil too. As a big fan of wholemeal flour, I heartily approve of its inclusion.

sounds delicious - your comments remind me of how much I love the green specks in zucchini cake - I find it odd that some people don't like to be reminded of vegetables in a cake - it just seems fun to me (is that odd?)

Choclette - yes, I'm lazy enough to not want to wash extra stuff! I was really pleased with the wholemeal flour in this cake - it didn't taste 'worthy'. I thought it would be fine as carrot cakes are sometimes made with wholemeal too. The lemon buttercream was good - I had a (frozen) piece of this cake yesterday and it was still lovely - buttercream freezes well!

Johanna - it's odd isn't it. I never worry about something being a vegetable - if it's cake, it's cake! And yes, it's fun to watch people's reactions when it's something a little unusual. I once had an office of people trying to guess the secret vegetable (it was parsnip!)