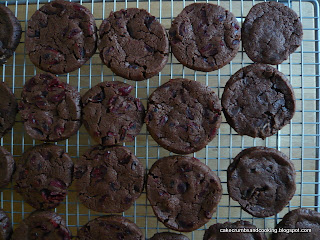 Thank you Celia. Well, I think that's pretty much the most important thing I could say about these fabulous cookies - if it weren't for Celia over at Fig Jam and Lime Cordial I would never have made these. I guess I ought to thank Dorie Greenspan too, from whom the recipe originates. Thanks Dorie! I think I vaguely remember her posting about them the first time round, but then when she revisited them recently they somehow seemed to leap out of the computer screen at me. I know food can't really do that, but these might as well have done, and I'm glad! 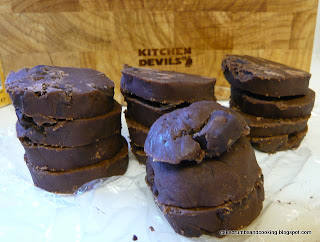 Chocolate cookies piled up before baking
I decided to follow the recipe exactly as Celia has given it, but instead of making all the cookies chocolate, I went with half of them being chocolate and half being dried cranberry. Although actually, now I think about it, it probably would have been nice to have both cranberries and chocolate chunks in the same cookie. Mmmmm, cranberry and chocolate! 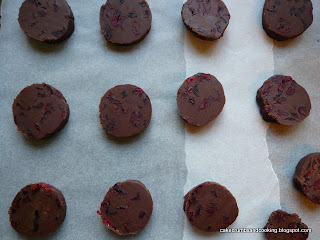 Cranberry cookies waiting to be baked. I love the way the ruby red of the cranberry glistens in the dark cookie dough! All in I think I got about 30 odd cookies. I wish I'd doubled the recipe. For the chocolate ones I massacred a Lindt chocolate bunny and broke it up into fairly chunky pieces. As Celia points out this makes the cookies harder to slice, but they didn't break up too much, and it's worth it to be able to use delicious chocolate rather than supermarket chocolate chips. The cranberry roll was much easier to slice. 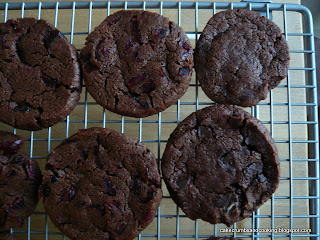 They don't spread too much when baked, so you could probably put them closer together than I did if you wanted. As Celia says, they are very delicate and crumbly. They made it into work intact, but only just, pack them carefully. This is possibly the only disadvantage of these gorgeous cookies - they're rich and chocolatey and actually, the crumbly texture makes them delicious and melting to eat. As one of my colleagues said, they're very more-ish. Difficult to eat just the one, two, three.... You won't regret making them!
Posted by Caroline at 12:50

De-lish! Your work colleagues must have been thrilled ...surely a promotion is on the cards!!
I've been looking for a chocolate cookie recipe for ages too, thank you!

I love really crumbly cookies - always seem to melt in your mouth so nicely. I had a whole list of chocolate cookies that I want to try, but I think these have just made it to the top of the list - and I love the thought of the cranberries too.

They look delicious and I am drooling over the dark choc cranberry combo! I remember these popping up on blogs a few years back and I never got round to trying them myself. I MUST now.

Ooh - nice! Love the chocolatey sheen and the thickness!

Now if only I had one of them sitting by my side right now...

I'm so glad you enjoyed Dorie's wonderful recipe - I keep rolls of the dough in my freezer now and try to only bake one roll at a time - as you say, they're just far too easy to eat. The cranberries are an inspired addition! :)

Such a cool name for a cookie! And they look amazing too so I can imagine that they may well offer peace to the world ... can I have mine as an unbaked cookie please (I'm bad I know!)

Those look good, I think I will have to try them next time I think about making cookies :)

Kate - if only a promotion were so easy!

Johanna - they do have a dark come hither look don't they. There are advantages to not having a chocolate loving OH - I get to eat it all myself!

Greedyrosie - I thoroughly recommend making them!

CC - they are nice and thick aren't they!

CHFG - well, now they're all gone I'm wishing I had one by my side too!

Celia - yep, bunny massacre here - fab, fab cookies thanks so much for the heads up on the recipe!

Maria - they really are!

Chele - yep, no problem, when do you want it?

Joanna - definitely a recipe to bear in mind!