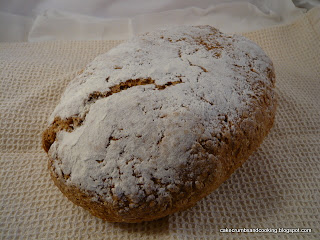 Is it a house brick, or maybe solid porridge? Was it all just a big mistake, or is it actually a loaf of bread? Well, it's defnitely bread, but it also comes under the heading of a big mistake too. Let me elaborate.... the recipe/inspiration for this bread comes from The National Trust Teatime Baking Book, yes, that one again (apparently my new favourite book). However, I had a bit of a mix-up with this one and have 'adapted' (i.e. made a hash of) it so much that I feel I can post the recipe as my own! 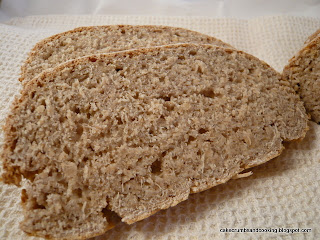 This bread is a non-yeasted soda-type bread, with the slightly unusual step of soaking the oatmeal of the title overnight in the buttermilk of the title. I didn't have the required fine oatmeal, but made do with medium oatmeal, and also didn't have buttermilk, instead substituting a mixture of fat-free Greek style yogurt and milk to make the mixture slacker.
Unfortunately the time between mixing the oatmeal and dairy to soak overnight and finishing the bread the following day was sufficient for me to forget that I'd halved the recipe. So I just stuck in the whole amount of flour as specified in the recipe for two loaves, rather than the one I planned on making. Well, I did wonder why the mixture was so dry - no way could I knead a bowl of crumbs! So I added more milk and eventually it came together. So try it if you want, but heed my warning about recipes with two stages separated by a period of sleep. This is why I don't try any of the more adventurous challenges out there in the blog world, I can't manage simple bread recipes, let alone anything actually complicated!!! 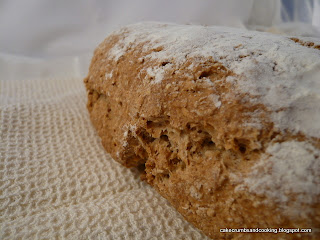 
Method
- Mix the yogurt, milk and oatmeal together. Refrigerate overnight. In the morning, the mixture will be pretty stiff.
- Preheat the oven to Gas 4/180C. Grease and line a baking tray.
- Add the flours, baking powder and salt to the soaked oatmeal, plus extra milk to combine (I didn't measure this, but at a very rough guess 50ml?)
- Knead until smooth.
- Pat out until about 1 1/2 - 2" thick. Place on the baking tray and dust with flour, or sprinkle with oats. To be honest, I mean to sprinkle with oats, but forgot that too. I'd also suggest cutting some slashes in the bread but forgot that. Can you see a theme developing here?
- Bake for 40-50 minutes (I think, the recipe says 35-40 but I definitely left mine longer than that!) until it is golden and sounds hollow when tapped.
- Remove from the oven and allow to cool, or serve warm with butter melting onto it... mmmm, butter! 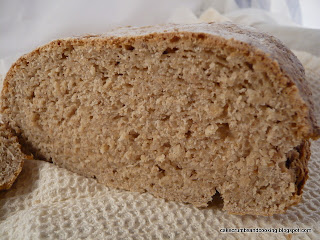 You can see from the picture that this is a really dense bread. I'm sure that a lot of people really wouldn't like it! I, on the other hand, am quite enjoying it! It has a distinctive (pleasant!!!) oaty taste and because it's so dense it really does remind me of solid porridge. I quite like porridge, so this is no bad thing in my books. And because it's bread you can spread it with butter, it's difficult to spread porridge with butter (and no, I haven't tried that!) I think it would make really good toast, or croutons for a salad. It hasn't really turned out the way I expected, but I quite like the finished result as it is, although I may try repeating the recipe more as it was intended at some point! 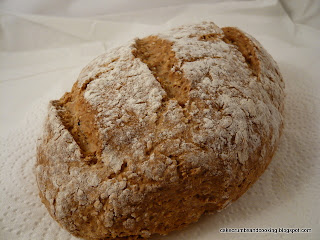 This is the bread made as it was supposed to be - with 125g flour in total rather than 250g. I still felt it needed a little extra milk to bring it together. The texture was pretty much identical to the first time I made it, so I didn't go too far wrong there. Nice bread though - to have made it twice so quickly!
Posted by Caroline at 23:00

My guess is that the finished product isn't far off what it should be - if you used the correct ratio of baking powder to flour then it would have risen properly. Perhaps all it needed was a little more liquid.

I'm glad I'm not the only one who remembers, half way through a recipe:

'Gaghh! I'm supposed to be halving the ingredients'

I try in vain to extract half the ingredients from the mixing bowl, often with very very little success! Case in point, the other day, with my failed macaroons, I think the failure could partly be attributed to me forgetting I was halving the recipe.

It looks really good though, I'm feeling very hungry for breakfast just thinking of it toasted and slathered in butter!

Oh how your post has made me laugh, I have been known to make similar 'adaptions' myself teehee

I bet you are right about it making good toast!

That's really funny because if you hadn't fessed up I wouldn't have known; the bread doesn't look dry or dense to me at all

It looks as though you overcame your initial problems. This looks like a lovely, hearty bread to me. I'm rather new to your blog but really enjoy my visits here. You've created a lovely spot for your readers and I enjoy the time I spend on your blog. I hope you have a great day. Blessings...Mary

It looks delish to me!

Suelle - I'm sure you're right. The only way I could get the dough to come together was to add more milk, so I'm sure this is how it was meant to be!

Kate - it's good to know that other people make mistakes too isn't it!

Chele - it's what makes recipes unique!!!

Foodycat - sadly I never got round to toasting it, but it was good untoasted too!

CC - it wasn't a dry bread at all, on the contrary it was quite moist, but it was pretty heavy!

Johanna - I think the bread was saved!

Mary - thank you for your lovely comments, I'm glad you are enjoying the blog!