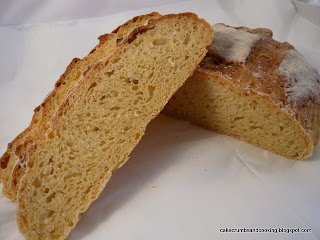 Maize bread
One of the points of keeping this blog is to record the things I make and bake - wonderful, and not so wonderful. Periodically I have a complete fail and occasionally just can't bring myself to blog about it, but mostly you get the good, the bad and the indifferent (in my opinion - you might try these and love them). Blogging the indifferent reminds me that I've made it, why I wasn't that keen and reminds me not to bother trying again! Not everything can be fantastic and, in my opinion, the two breads that follow fall in the indifferent, not really worth trying again category.
Both are from Dan Lepard's book The Handmade Loaf. I feel bad saying that I didn't like these, but it's true. There are lots of recipes in there and it's down to personal taste that I don't like these rather than bad recipes so don't let this put you off the book. 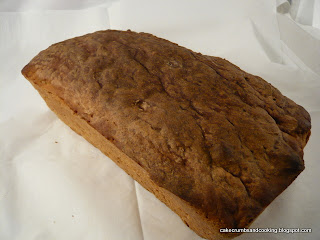 Lemon Barley Loaf
Up first: Lemon Barley Cob. This is a hybrid sourdough/yeasted loaf and for some reason the flavour combination just didn't do it for me. I don't know whether I let the bread overproof (I seem to remember that I did) but the texture was quite odd too - sort of crumbly, so I'm not quite sure where/if I went wrong here. In any event I wasn't all that keen on the lemon. Dan says this is a savoury bread, and I would totally agree that it wasn't sweet at all, but I couldn't find a good partner for it, so I'm unlikely to make it again with lemon. I might try the base recipe with the barley flour and sourdough/yeast hybrid again at some point, but I might not. 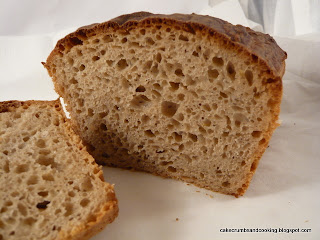 Lemon Barley loaf
Secondly: Maize Bread. This is a straight yeasted dough using white bread flour and maize flour plus buttermilk as part of the wet ingredients, and has cooked polenta broken up into it. The recipe worked fine, I didn't allow it to overproof and it was straightforward to make. My antipathy towards this one is based mostly on texture - again it seems slightly crumbly to me, which I'm putting down to lack of gluten in the maize flour (which is 30% of the flour in the recipe) and my taste buds can't really detect any specific flavour in there, it seems insipid which I wasn't expecting. I wonder if I forgot the salt? Anyway, I probably won't make this one again. The day I made it, J dropped in on her way home from holiday. I was planning to give her half of this so she probably feels glad that it wasn't made in time!!! I'm eating it, I'm just not over the moon about it. 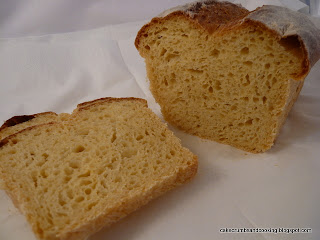 Maize bread
So there you go, two that I just didn't enjoy that much. Live and learn!
Posted by Caroline at 18:30

Tis true - blogging is about the good and the bad! As hard as that can be ;0)
Shame they didn't turn out quite as you had hoped, they look great, especially the lemon barley one, the sourdough texture looks just perfect.

I think the less-successful ones are just as important to blog about! They both LOOK good, but I can understand that the lemon may have been a bit much in that loaf.

What a disappointment after all the time needed to make bread. But you have to try new things or you'd never find the things you do like!

They look good so it's not as if you didn't put the effort into these ones. I think I made the lemon one once and wasn't that keen. I liked the corn one, I know it is important to use very fresh cornmeal in breads, it goes stale very quickly apparently. I like it for the colour in bread but often add part yoghurt or something like that to give it a bit of tangy taste. Makes nice croutons, cut up and tossed with a bit of garlic in oil.. if you are that way inclined. :)