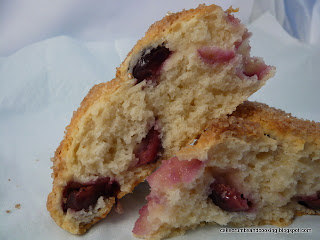 What, you mean you hadn't heard about this?!? It's international scone week!!! (Check out Celia's blog for links to some of last year's participants) And I couldn't be happier because I love scones. I'm sure I've said this before, but never mind, now I've said it again. They're just such a good portable snack - not too sweet, not too rich (well, until you slather with butter/clotted cream/jam), they're quick and easy to make and bake and they're all round fantastic. I've tried out a few recipes for scones, but tend to stick to my old tried and true recipe (1lb self raising flour, 4oz butter, 2oz sugar, 3.5oz raisins) which I know by heart, in pounds and ounces because I've been making them since I can remember and I started to cook in pounds and ounces! I've been known to go to the freezer after dinner, realise that I'm all out of scones and turn the oven back on to knock out a quick batch to satisfy my craving... 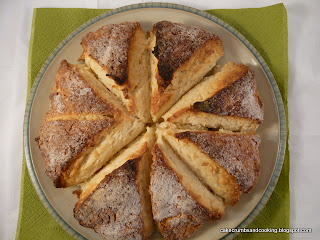 So it takes some recipe to trump my T&T. Well, I think this one has done it and done it with style. And what's most annoying is that I've known of the recipe for years. I remember reading the recipe in the April 2002 edition of BBC Good Food and wondering when I could make them. I was at uni, without a reliable oven and then by the time I arrived home I'd forgotten about them. Over the years they've popped in and out of my memory, always being pushed down by something else that looked more exciting, but I have finally, finally managed to get round to making them. I'm so cross - nine years of missing out on these delicious treats. If you're a fan of scones make sure to make these soon, don't make my mistake and wait for years before trying them. 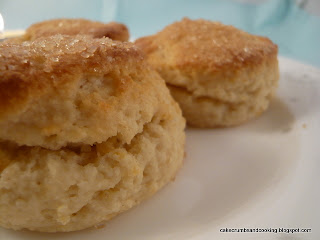 As you can see, I've already made them three times! The recipe is here, and I followed it exactly, well almost. I subbed lemon for orange. The first time I made them I decided to make a large round, as instructed in the recipe. Mine caught a little because I was unsure as to whether it was cooked through and left it in a little too long. It didn't taste burnt though, contrary to appearance. I did divide it into eight rather than six though, which was a good decision as the eight were still quite large! The next time I decided to use a cutter and got 12 rounds. There is a lot to be said for making one large round though - it's much quicker to shape the dough, and the end result seemed to be moister than the smaller ones. Don't forget to sprinkle with sugar - that crunch is one of the lovely things about them!
Having made this discovery, when I made the third batch I switched back to one large round. For the third making, I chose fresh cherries and vanilla although I can't quite remember how much of either I added, I'd guess about 100g fresh cherries, stoned and halved and a tsp of vanilla. Wow were they delicious - the vanilla and cherry combo was just gorgeous - the dough being vanilla flavoured and punctuated by juicy bursts of cherry. Can you tell I'm in love? 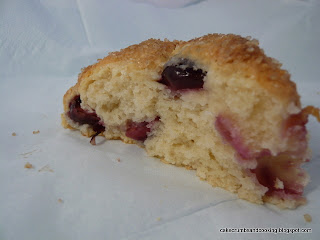 This is such a good recipe - these are the moistest scones I've ever had, and the lemon flavour permeates them so well. I can imagine that they'd be great served as suggested with clotted cream and lemon curd, but actually, they're moist enough to be utterly delicious on their own - no added butter or other embellishment needed. And I still have some in my freezer ..... yum!!! 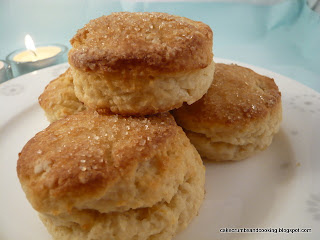 This is the next in my series of 'Marked and Made' recipes - those that have been languishing too long in the 'to make' pile. Jac, over at Tinned Tomatoes has recently revived the Bookmarked Recipes (founded by Ruth at Ruth's Kitchen Experiments) event and so I'm submitting it to that too. Have you finally got round to making something that's been in the pile for far too long?  (And don't pretend you don't have a pile, you know exactly what I'm talking about!!!) Check out the round up too! 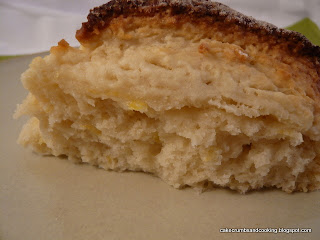 well I never I didn't know it was scone week! feel better about scoffing 3 yesterday now, I will have to make some too as suprisingly I've never made scones

These look and sound marvelous!
I'm going to try them with blueberries and lemon zest!
Thanks for the recipe!

C, they look absolutely divine!! So moist and tender! I would never have thought to add ricotta to a scone mix. And your addition of cherries is inspired! :)

All of these scones look and sound delicious! I agree that adding ricotta is a stroke of genius!

Scones are my fave thing to make! I love making candied ginger scones. They're my go-to for functions. I got the recipe from "Victoria: at table" and they are by far the best scones I've ever had.

Scone week? What a terrifying thought. I have never yet made an edible batch of scones.

What fun! Scones being cut out everywhere. Yours look absolutely splendiferous. Brian would love those cherry scones, I will definitely have to try them next! I really like the idea of patting out one big circle and dividing them up. I have done the square ones but I always end up with the outside ones being funny shapes. So which of the Good Food Scone recipes is the one that you like, I have found 29 scone recipes on their site! Help! xx

Found it, it's your second link isn't it? I'm being a bit stupid tonight. I reckon we ought to be brave and try making our own ricotta. I saw Cityhippyfarmgirl's post on the subject a little while ago. If you will, I will!

Cupcakegirl - I'm impressed you had three - I'd better get into practice!

Heidianne - blueberries and lemon sounds fantastic, I might borrow that idea!

Celia - ricotta must be what makes these so wonderfully moist! I just wish it had been my idea!

Sonia - thanks, yay for scones!

Jean - try these, they're different from normal scones, and taste great.

Joanna - sorry, thought I'd linked to the recipe - tis the one called 'crunchy crusted citrus scones' or something very similar. The link to the recipe is just below the third picture, where it says 'here'. Enjoy them!!!

Joanna - cross posting! I don't think I'd dare make cheese, but I'll have a look at Brydie's blog and try and find the post you mean.... tomorrow not now!

Yep never heard of scone week, but love the idea. Those sugary crusted scones look so delicous. Especially with the berries :)

I love your Marked and Made series - great idea. These scones look fab - especially the ones with the cherries in. I love that sugar crunch on some scones and I also love lemon. I dislike dry scones so your description of them being so moist sounds great. I think the scone is underrated, isn't it?

Oh, these scones sound so delicious and I can see you're an expert as they look perfect. I'm still finding my way with scones. I've only ever made them with wholemeal flour until recently, so they were always rather on the heavy side. Now I'm only using 1/2 wholemeal and they are working much better, but I still think of me and scones as not working too well together. My mother always made her scones in a round so yours has rather a nostalgic ring to it. It looks so good this way too with a lovely cross pattern

Brydie - thanks for the link, I'll check it out!

Chele - give them another go!

Katie - the cherries were definitely an inspired addition, and the sugar crunch is fab!

Lou - thank you! I think scones are definitely under-rated, that's why I've decided to promote them ;-)

Choclette - thank you for your comment! Your scones look great on your blog, I must try chocolate ones soon!

You've reminded me now - I made some heavenly fresh cherry scones last year! Must do them again.

I've been running from scone to scone this morning! Yours really caught my eye.. I've got a large tub of cherries just begging to be made into some scones this morning!! xx Smidge