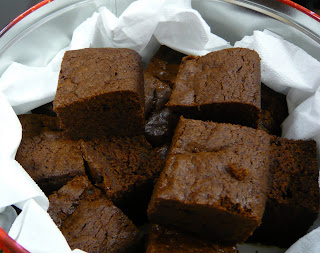 The inspiration for these is another recipe from my recent purchase 'Easy baking' by Linda Collister. In the book they're called three chocolate squares - cocoa powder, dark and white chocolate, but I decided to ditch the white chocolate topping and just have the cake. I also didn't have the specified soured cream but did have creme fraiche lurking in the fridge. An adapted version was born! Ignore the uninspired title of the post, I just couldn't think of a good way to describe them!

Method
- Preheat the oven to 180C/Gas 4. Grease and line an 8"/20cm deep square cake tin.
- Cream the butter and sugar until light and fluffy.
- Add the chocolate and mix to combine.
- Add the egg, flour, vanilla, baking powder, bicarbonate of soda, cocoa powder and creme fraiche and mix well, until all is combined and no traces of flour remain.
- Spoon into the tin and level.
- Bake for 40-50 minutes until just firm. (The original recipe specified 25-30 minutes, but at this point my cake was still extremely wobbly and nowhere near done.)
- Remove from the oven and allow to cool in the tin before turning out.
- Cut into 16 squares.
Wait for admiring comments!

The flavour of this cake is really good. I wasn't going to blog about it due to the lack of attractive photos (the photo at the top makes it look far more dense and brownie like than it actually was, an artifact of poor lighting) but it really does deserve a mention. I took a couple of chocolate cakes into work in close succession and the opinion was that this one was better. I'm not sure about better, but I can understand the comment. This cake is moist with quite a rich, deep sweet flavour given by the muscovado sugar. The other cake was made with white sugar, which has a much lighter sweeter flavour. I'm sure the creme fraiche also made a contribution to the moistness of the cake, even though I had to cook it for much longer than specified.
Posted by Caroline at 17:30

They look lovely - the sort of thing you always fancy eating!

I know they're not quite brownies, but they look like brownies and just giving them the name brownies might make them even more tempting. I've made something similar I just called chocolate squares, but they were made with melted dark and melted white chocolate.

I am in a chocolate deprived state right now... these look lovely indeed :)

I love chocolate brownies, cake, cookies, chocolate anything and those squares of chocolate look delish!

I love its deep dark colour, so chocolaty. Sometimes the simpilist cakes are the yummiest

They look so appealing, C, even at 6am in the morning! I could have a piece right now with my morning cup of tea..