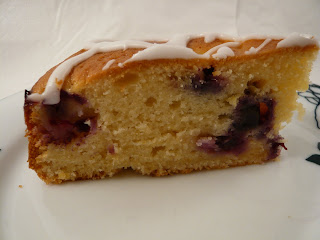 After a couple of so-so efforts (a combination of many things - but mostly me not following the recipe as stated!) this one was really successful and will be made again! It just seems right at this time of year to use some of the abundance of fruit in baking (even though that pretty much negates any health benefit the fruit may have had in its original state!) and so I'm doing just that - this cake and the recent peach and redcurrant cake. 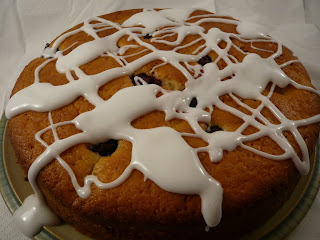 Again, I made this a couple of weeks ago and had no recollection of the recipe I used, but luckily found it scribbled on a post-it note, and it even had the temperature and time of baking on it - how organised am I!!! I do recall having blueberries to use and some greek yogurt that needed to be used too and so I searched for blueberry recipes on the BBC Good Food site, which led me to this fresh fruit cake recipe, which then led me to this vanilla cake recipe. However, I went my own way, as has become more common of late, and decided to incorporate some of the ideas to fit my own requirements. I didn't want such a large cake and to me, blueberry and lemon pair very well so I ended up with the recipe below. The best tip that I took from the summer celebration cake (in the second link) was the idea of mixing up all the batter, spreading half into the prepared cake tin and then folding the fruit into the remaining mixture before spreading this on top. I thought this was a great way of stopping all the berries sinking to the bottom of the cake, and you can see from the pictures that there is a pretty good distribution throughout the cake. 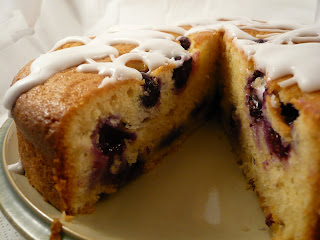 Method
- Grease and line a deep loose bottomed 8" cake tin. Preheat the oven to Gas 4/180C.
- Cream the butter and sugar until pale and well combined.
- Add the flour, yogurt, eggs and beat until well combined and smooth.
- Add the lemon zest and mix in well to distribute.
(I don't add the lemon zest with the other ingredients because I tend to find that it wraps itself around the beaters of my electric mixer and I have to remember to remove it into the mixture specifically instead of just banging the beaters on the side of the bowl)
- Spread half of the mixture into the tin. It doesn't look like there is very much, but it will cover the base.
- Gently mix the majority of the blueberries into the remaining cake mixture, holding a few back to sprinkle over the top.
- Spread the blueberry mixture over the mixture already in the tin, fairly carefully so as not to mix it all up and level off. Distribute the remaining blueberries over the top of the cake and place in the oven.
- Bake for 45 minutes, although you may want to check a little earlier to see that it isn't browning too much. As always, it may take a little longer to cook, it's done when a cake tester/wooden cocktail stick comes out clean (but mind the blueberries!).
- Remove from the oven and cool on a wire rack.
- For the icing, mix the icing sugar with lemon juice to your desired drizzling consistency. You might want to start with less than 100g icing sugar, I have a vague recollection that it made too much. Drizzle. Artistically if you can/want, or not if you're me!!! 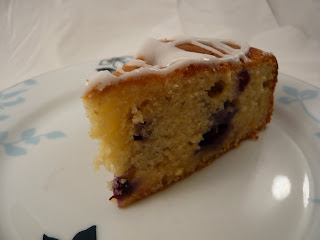 I really enjoyed this cake - the texture was soft and moist and the flavour predominantly lemon, but when you bit into a blueberry you get a lovely blueberry burst of flavour. The icing drizzle added a little sweetness, but not too much and the lemon complemented the cake flavour well. Went well at work, but to be honest I wish I'd kept more for me! To be made again!
Posted by Caroline at 19:45

And believe it or not, I've recently made a very similar cake! My ingredient quantities are slightly different, and I used frozen berries (it's midwinter here). The combination of the yoghurt and berries is sublime, and the texture of your cake is so fine - my crumb was somewhat looser. Your cake looks beautifully moist...

This looks so tasty - blueberries are one fruit my Chief Tester will eat in cakes, so I'm tempted to try this.

I'm in a similar position with recipes - I currently have a scrap of paper which I know is a halved recipe, converted from cups, but I've no idea where it came from, nor what I was searching for at the time. I intended it to be my next project several baking sessions ago, then got side-tracked.

Great looking cake C. I'm one of those strange people that can't seem to eat blueberries on their own, I need to have them in something. My preferred carrier is of course cake ;0)

Looks great!! i love love love blueberries in baking, and this looks like a brilliant recipe, thanks!!
Becca :-)

I adore blueberries in cakes - I love the way they burst when you bite into them! The icing looks tempting too

Looks gorgeous and appropriately seasonal too...

Celia - thanks, I was getting bored of blue on white! I bet your cake is lovely too!

Suelle - Glad to know I'm not the only one with loads of bits of ideas on various scraps of paper floating around!

Chele - I rarely eat blueberries on their own - much better in baked goods I find!

Johanna - I was surprised at how well this technique works for distributing the fruit evenly, I'll definitely be trying it again! Glad you like the new theme!

CC - blueberries are definitely a good thing in baking!