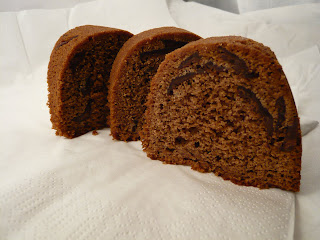 This cake was inspired by Suelle at Mainly Baking and an unopened jar of Bonne Maman caramel staring at me from the cupboard, asking to be used. Being a fellow Dan Lepard fan, she originally got the recipe from here, and decided to modify it - read about the cake she made here. I thought it looked really lovely, but went back to the original recipe and modified my own version from there. Hazelnuts were obviously a no-go for me, so I decided to use fine semolina instead. I think with hindsight this was not the best decision, I perhaps should have just substituted more flour. I don't think the semolina added anything to the flavour and I found the very slightly crunchy finish to the cake not particularly to my taste. I also added around 100g chocolate, chopped (I used 70% cocoa solids) to the cake and baked it in my bundt tin (love the bundt tin!). I greased the tin well and was pleased to find that the cake came out with only a little encouragement. One small part stuck, but this was where a whole load of chocolate bits had fallen to the bottom and there wasn't enough cake mixture to keep them in the cake, but it was only a tiny bit, and I quickly patted it back onto the cake! No one noticed ;-) Having not noted anything to the contrary I suspect I probably followed Suelle's baking time of around 45min at 180C/Gas 4.
I ran out of time to ice the cake (pitfalls of trying to do too much in one day!) and I think it really would have benefitted from the icing specified by Dan in the original recipe to accentuated the caramel component, or a chocolate glaze to bring out the chocolate flavour. Or both, if you want to be decadent. I don't really have a good chocolate glaze recipe though - if anyone could recommend one I'd be very grateful! It was a good cake, and had a nice flavour, but I didn't think it was anything special. I was also slightly disappointed that the caramel flavour didn't come through more, but suspect this would be rectified with the correct icing. Overall it was an enjoyable light caramel/chocolate cake that I think I'll probably repeat with modifications. 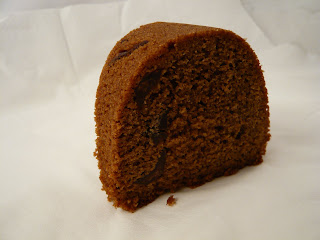 Hi, C - nice looking cake. Shame you were disappointed with the flavour.

I often use this Chocolate Glaze from a Mary Berry recipe:

Melt 175g plain chocolate and 30g butter together in a small thick-bottomed saucepan. Remove from heat and beat in 3 tablespoons golden syrup and 2 tablespoons milk. Cool until it is the consistency you need, then drizzle over or pour onto cake and spread evenly.

The recipe says to use it while still warm, but I like to cool it to a thicker consistency then spread it - but I'm a chicken, and imagine it running right off the cake if it's too liquid!

It sets with a shiny finish. Half would probably be enough for drizzling over a bundt cake, rather than coating the flat top of a round cake.

Mmmmmm - I don't think its possible to go wrong with a combo of chocolate and caramel in cake form
;0)

C, it looks very nice, but I've not had much luck with semolina in cakes either. They tend to go gritty. In Dorie Greenspan's yoghurt cake recipe, you can substitute extra flour for the almond meal, so it probably works ok as a rule, I think.

Icing would have been nice but then you would have lost the lovely round curviness of that gorgeous bundt!

It looks a lovely cake - I love the texture and it looks dense and fudgy like it should be packed with flavour. Shame it didn't do it for you.

It certainly looks lovely and despite what you say, I think I shall certainly be trying it at some point.

Suelle - thanks for the glaze recipe, I'll have to try that soon. I too am chicken when it comes to spreading icing, I'll wait until it's cooler to spread!

Chele - thanks! Chocolate and caramel are both delicious!

Celia - I guess I'll just have to accept flour as a sub. I just wonder if there's anything more interesting out there! I love the roundness of bundt cakes!

CC - it was nice enough, and I'll probably try it again with icing and all flour rather than semolina.

Choclette - let me know what you think if you try it!

Have you tried using soya nuts for recipes that call for nuts? I've seen a few bloggers with allergies use them.