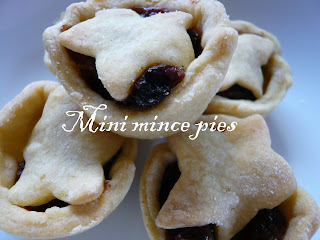 Hopefully that's a tempting enough picture for you to want to make the mincemeat that follows, just so that you can put it in your own mince pies. I admit they are rather rustic, but at least everyone knows that you made the effort of making your own!

Anyway, we'll start with probably the best picture of the mincemeat, below, before it's cooked. After it's cooked it seem a little brown and perhaps even uninteresting. But don't be fooled, it tastes delicious. 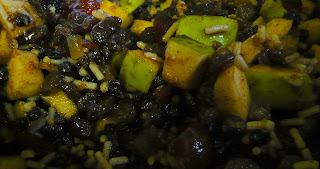 The recipe I use is essentially Delia Smith's but with a different set of spices and a couple of adjustments to suit my taste. I doubled the recipe given on her site because although mincemeat is not difficult, it is time consuming and because it keeps well, it makes sense to make a reasonably large batch. I didn't bother with the overnight standing step - it was late the night before I made it and I value my sanity and sleep above mincemeat. By all means, leave it to stand overnight if you are more organised than me.
A quick note on ingredients; I use whole candied peel and chop it myself. Why? well, as a child I hated mixed peel and couldn't see the point of it, until I decided to buy the whole stuff and cut it myself. It is totally and utterly different - it isn't dried up or bitter or any of the nasty things I associate with ready chopped. If you don't mind ready chopped use that, but I don't mind a few extra minutes spent with a pair of scissors cutting my peel. I also add glace cherries because I like them, and leave out nuts for the obvious reason that I'm allergic to them! So here is my amended and adapted mincemeat recipe.
Mincemeat
Ingredients (makes about 6 lb)

My oven doesn't have Gas 1/4 so it was cooked on a mixture of Gas 1 (when I wanted to leave the house and be sure the oven didn't go out and the 'S' start setting when I was in the house and could keep an eye on the oven).

Method
Delia recommends mixing all the ingredients together (apart from brandy) in a large mixing bowl, covering and leaving for about 4 hours in a cool place, to allow the flavours to mix and develop. I needed to get on with mine, so skipped the waiting step, so here’s what I did:
- Mix all ingredients together in a large pan. I used a pan as I don’t have an ovenproof bowl large enough to take all the ingredients.
- Preheat the oven to gas ¼, 225F, 110C (but see note above).
- Cover pan/bowl loosely with foil and place in the oven for 3 hours.
- Remove from the oven and allow to cool. As it is cooling, stir from time to time. This will allow the melted suet to coat all of the other bits and pieces in the mincemeat. This is important for appearances sake, as you will see below! Stir in the brandy if using.
- Pack in sterilised jars (see here for Delia’s take on sterilising jars at the bottom of the page, or here for mine - first paragraph of the method!) and cover with waxed discs and seal.

The mincemeat will keep ages in a cool, dark place. Delia says up to three years. It probably won’t last that long round here though! The mincemeat is probably best made a few weeks before you intend to use it to allow it to mature a little, but I used mine straightaway and it was fine. 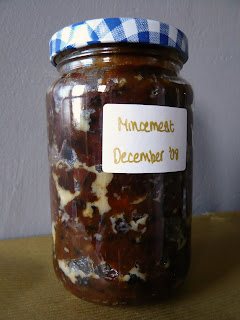 If you ignore the instructions to stir the mincemeat as it cools, you will end up with small pockets of fat as above. I don't think this really matters in terms of flavour, texture and so on, but it doesn't look very attractive. 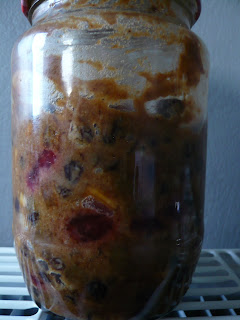 Here is some mincemeat made by J last year, who didn't ignore Delia's instruction to stir the mincemeat as it cools and subsequently doesn't have nasty pockets of unattractive fat.... Do it this way!!!