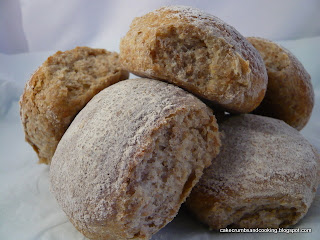 There hasn't been very much bread on the blog recently. That isn't because I'm not eating much, on the contrary I'm eating as much as ever, but have been revisiting old and new favourites, particularly this loaf, made with spelt flour and white, and the more recent soda bread, which has displaced every other bread in my affections at the moment. I just love the way that all the different flours combine to create the complex taste. Anyway, this isn't about soda bread... 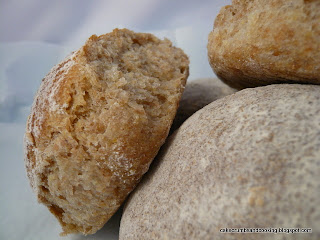 Dan (no surprises round here!) recently published a recipe for spelt and corn batch rolls, and the accompanying picture looked so inviting that I simply had to try them. I decided to halve the recipe and made six rolls from the resulting dough, which were just the right size for my lunch, and will last the week, which is perfect! 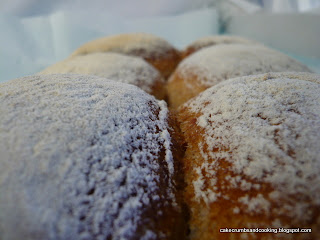 I'm a big fan of spelt flour - I think it's got a slightly more rounded flavour than wholemeal, perhaps without a very slightly bitter edge I occasionally notice with wholemeal flour (but not often!). And in addition to the links Dan gives in his recipe to millers of traditional flour I'd like to add The Watermill at Little Salkeld in Cumbria. J, T and I have visited their premises a couple of times and been very impressed by the range of flours they produce, some of which are not only organic but biodynamic too. Give them a visit if you're in the area. They're also near the better known Village Bakery in Melmerby, which is also good for a visit! 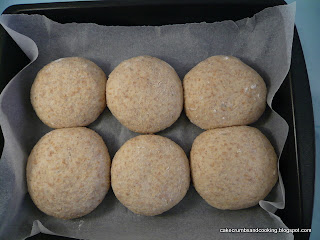 The dough was simplicity itself to make - very little kneading needed at all to get a really lovely result. I was a little nervous of cooking them so hot, and did slightly chicken out - I baked my rolls at gas 8/230C instead of gas 9 and made sure to give them quite a thick protective coating of flour just in case they decided to try and burn. Even at gas 8 they were still done after 25 minutes. I also placed them closer together to get that delicious soft edge that comes from batch baking rolls and breads rather than separate as in the Guardian photograph. 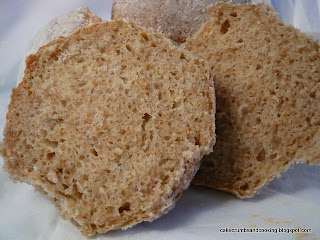 The crumb shot.... nice texture!
I'm going to submit these rolls to YeastSpotting, run by Susan of Wild Yeast. They were delicious, hearty rolls, and I think that they'd go perfectly with soup in the colder months of the year (or now for my friends in colder climes!). There wasn't a distinctive taste of polenta/corn but the overall taste was delicious. And my heavy coating of flour had indeed protected the tops of them quite successfully! I'll return to this recipe later in the year to accompany hearty soups and stews I think. 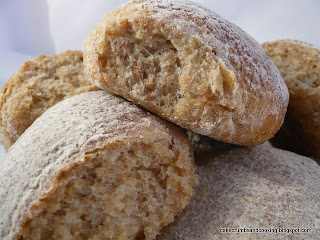 I love your blog and excited to be following for more awesome posts!!
Thanks...

. You've made them look beautiful! I like that soft batch edge look as well. I've got loads of spelt in the cupboard - maybe it's time to rustle up a batch to go with the pea and lettuce soup from the garden :)

I really must get some spelt flour again, the rolls look great and sound ideal for dunking in soup!

Foodness Gracious - thanks for following and for leaving a comment!

Joanna - these would be perfect with soup - really robust.

Anne - thanks, yes, ideal for dunking in soup!

As you know, I adore spelt flour! I've been eyeing off that recipe of Dan's - great to know it works well, thanks C! :)

Celia - you're welcome, it's my pleasure! Let me know how it goes if you bake them.

Johanna - they would be perfect with one of your delicious soups!

I made these last week and they were delicious I substituted white strong flour for white spelt and they were lovely. Thanks for inspiring me to get back into baking bread I haven't done it for years and I forgot how fun it was.