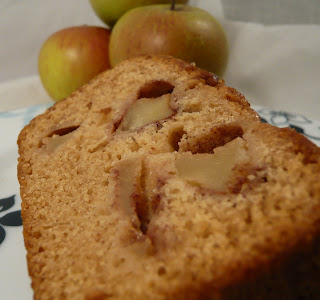 This is a Dan Lepard inspired recipe. Well, it's more than that really - it's his recipe, but with my substitutions for ingredients that were unavailable. The original recipe was for rye apple cake, and can be found here, on Dan's forums. As you can see, it's receiving rave reviews (and rightly so if this incarnation is anything to go by) and so I really, really wanted to make it. Apples are perfect right now, and a touch of spice is just right for the miserable rainy, windy, chilly weather we're having here at the moment.

Before I went shopping, I checked my cupboards and was sure I had rye flour. On my return and closer inspection, I didn't have rye flour, so I had to substitute normal plain white flour. I was also obliged to substitute the ground almonds. I do sometimes wonder why I end up wanting to make recipes that require ground almonds when I clearly can't eat them and there are so many recipes out there without nuts in!!! Almonds are much higher in fat than flour, and have a different texture and various other properties, so it's not necessarily just a case of a straight swap for flour. I'm never sure what the best substitute is but in this instance I spotted some semolina that I thought might add a little of the texture of the almonds (although not the fat or the flavour) so I used that instead. I was hoping that these changes didn't mean that the apple chunks would sink..... and fortunately they didn't! If you don't have nut allergies to contend with, use the almonds, I'm sure they're delicious!

You can see the lovely soft apple surrounded by a layer of cinnamon in the picture below. I guess that the apple lost moisture as it baked and that's why the apple pieces appear to be sitting in their own little holes. I was really impressed that the apple pieces stayed suspended so well in the mixture, I had worried that they would sink, but they were evenly distributed. And I didn't just pick a good slice to photograph - it was like this through the whole cake! Some people noted that it took longer than stated to cook - mine was fine at about 40 minutes from what I remember. 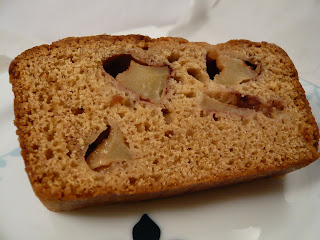 I'd love to make this again with the rye flour and see how it changes the taste and texture of the cake, and how it complements the apple and cinnamon, but this cake is delicious in its own right, and I'm certainly glad that I didn't let having no rye flour put me off trying the recipe!

This was gorgeous - the cinnamon-y warmth and the soft apple in a lovely moist cake. I didn't put flaked almonds on mine before baking but added a (very) generous sprinkling of demerara sugar before baking (my hand didn't slip, honest!!!) and this provided a lovely sweet crunchy top to the cake. Didn't last long at work and received appreciative comments.
Posted by Caroline at 19:23

Ahhhh, apple and cinnamon- such a gorgeous combination. Your cake looks delicious and perfect to cheer you up when the weather is so grey and wet!