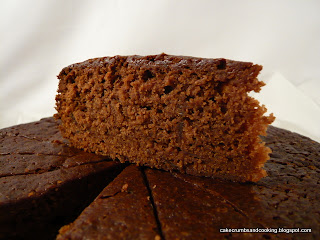 Yes, National Chocolate Week continues, as does my celebration of the delicious substance!


This is the chocolate cake recipe I turn to when I have run out of other ideas and want a reliable, rich, bitter and fudgy cake. I've made this cake many times over the years, it's definitely a keeper.
The recipe comes from Nigella Lawson and she actually uses the base recipe twice in her How to be a Domestic Goddess book. It's the storecupboard chocolate cake, but it's also the chocolate cherry cupcake recipe base. It's very adaptable - the original recipe calls for orange marmalade (mmm, marmalade) but I have used any number of different jams at different times, and this time I used grapefruit marmalade. It's a very handy recipe because it helpfully uses pretty much the whole jar of marmalade/jam (if you buy the 340g ones obviously, but these are pretty common now, where pound jars used to be more common - 454g) so no annoying half jars hanging around. 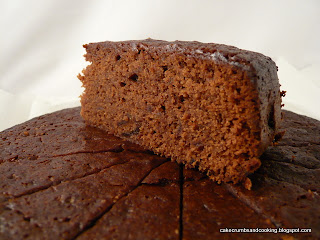 
Method
- Preheat the oven to 180C/Gas 4. Line an 8" springform tin.
- Melt the butter in a large saucepan (the saucepan is your mixing bowl and will have to take all the other ingredients).
- When it is melted, add the chopped chocolate and leave until starting to melt. Stir the chocolate until completely melted. Add the marmalade and sugar and stir well until smooth and amalgamated. Add the eggs and stir again to combine.
- Add the flour and beat in until smooth.
- Pour into the prepared tin and bake for about 50 minutes, although mine always takes about an hour. It's a good idea to cover the cake with foil for the last 20-30 minutes or so (i.e. cover after about 30 mins of cooking) as I find the top gets very dark and erm... caramelised.
- Remove cake from oven and allow to cool on a wire baking rack. 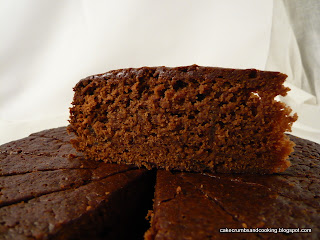 It seems to be in the nature of this cake that the surface is quite dark, almost burned/caramelised. While this is sometimes quite nice, I have taken to putting a greaseproof paper/foil cover over it part way through baking to prevent the top darkening too much.
I adore the texture of this cake - it's so moist and rich and fudgy. In the same way as brownies contain an obscene amount of sugar, so does this recipe - there's the sugar in the recipe, but also that in whatever preserve (jam/marmalade etc) you've chosen to use. I think my favourite incarnation is the original - the bitterness of the orange and the bits of peel are the perfect complement to the aforementioned sugar! 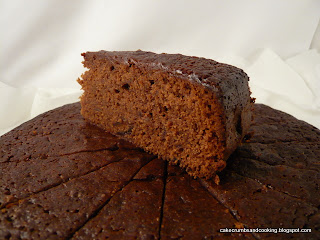 This particular incarnation was quite bitter, and has made me wonder how it would work with milk chocolate instead of 70%, just to counter some of the bitterness brought by the grapefruit marmalade. Next on the list to make with this recipe is a ginger chocolate cake using ginger preserve. Mmmmm, chocolate ginger!
Posted by Caroline at 22:45

What a perfect slice, I love Nigellas recipes and remember watching her many years ago..
Take care,

Looks wonderfully soft and fudgy. I wonder if it would work with other jams too - raspberry or cherry...only one way to find out!

I can't understand why I haven't come across this recipe before now. Your version looks perfect for a quick everyday sort of cake!

Love the photo of the cake and how it's pre-cut into slices!
I'm hoping my tastes will change and I will learn to like grapefruit - but it's just too bitter for me at the moment

I did wonder how you incorporated the grapefruit. I like the darkness of the cake. Oh and another Bookmarked Recipe. You may enter more than one. Feel free to tell me to shut up about this :)

Great cake C. What a nice idea to use grapefruit. I made this for the first time earlier this year (or was it last, time flies) and I was bowled over by it. Marmalade cake didn't appeal at all, but now I've tried it, I've been completely won over. Agree with CC about your photo - it's very well done.